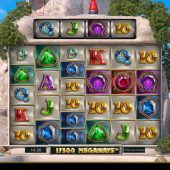 Max Megaways slot by Big Time Gaming is loosely themed on 007 or a secret agent if you like. The name doesn't mean you're playing on maximum ways each spin but I think Max is simply the name of the spy here. There are elements of Netent's Secret of the Stones slot here along with one exciting feature modifier appearing in BTG's Royal Mint Megaways and otherwise a similar set-up which the traditional Bonanza slot player will recognise. We have an island resort as the picturesque backdrop here with a few 'thriller' sound effects to go with the usual BTG ones in their inimitable style. So will Max prove to be an agent of doom or can we spy some serious loot here?

On the reels...
You get 6 reels on Max Megaways™ slot of 2-7 rows each with a top scroll of 4 tiles over the middle reels, thus offering 324 up to 117,649 ways per spin. You pay 20 coins and the Purple Gem is the top 6-of-a-kind pay at 5x, with the lowest card value at 0.3x. In the base game there's 4 random modifiers signalled by the red light over the reels flashing during a spin. Wilds can only land on the top scroll and this is where 3 of our 4 modifiers are, the other being a simple max 117649-ways spin. You could get expanding Wild(s) downwards, a full 4 Horizontal Wilds filling the scroll or Wild Bombs which destroy the whole screen for another chance. Suitcase scatters appear on all six reels too, plus if you win 25-100x bet in the base game, you can gamble the win on a wheel for the bonus with the green winning segment bigger according to how much you won. If over 100x, you can bank the excess and spend 100x for the feature.

Free Spins
You need 3 Suitcase scatters for 10 increasing multiplier free games with +2 for any over 3 and can earn retriggers of 4 or 8 spins for 3 or 4 appearing on the top scroll during them. After triggering the bonus, you're offered 2 or 3 picks from the hidden 5 modifiers. If the trigger includes the reel 6 Megascatter (Suitcase shows diamond inside not gold!) you get to pick 3 modifiers, otherwise it's 2. These are:
2-scatters - you will get +4 spins for just two scatters on the top scroll instead of 3
Extra Ways - minimum of 5 rows per reel, 15625-ways per spin
2x Multiplier steps - instead of 1x increasing multiplier per tumble, you get 2x
Remove Low Symbols - 9, 10 and Jack are removed from the reels
Expanding Wilds - any Wild on the top scroll expands to fill the reel
The base game modifiers don't activate during free games. We are informed 11,140x is possible. In some jurisdictions you can buy the standard feature of 2-picks for 75x bet and the Megascatter 3-picks trigger for 200x.

Our View...
The RTP of Max Megaways slot is 96.37% and to be fair it does bring something new to the tired old Megaways selection available nowadays. The sounds and look are nothing exciting but the modifiers can often bring a few surprises in the base game. The free games are very volatile and you really need to be picking the 2x incremental multiplier every time, preferably alongside more ways or expanding Wilds, if a Megascatter trigger then those three together. The 2x scatter retrigger doesn't seem to make too much difference as we all know about the 'curse of the BTG retrigger' (i.e. mostly all dead or mostly dead spins!) so it's all about getting the multiplier up early to say 12-16x in the first 3 or 4 spins, like with the Royal Mint slot special 40-collection trigger. It's fun but beware Max Megaways slot can hang onto its cash even better than that spy conceals his secrets...