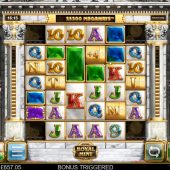 Royal Mint Megaways slot by Big Time Gaming is a simple amalgamation of three existing Megaways games previously released. You have elements of Bonanza from which the reels and pays are taken, Opal Fruits with its double scrolling reel and Lil' Devil with its enhanced feature trigger. The background is the Royal Mint building with cherry trees in blossom to the sides of the reels and soft jazz music as you spin. The symbols are simple as usual with coloured gems and gold on the reels so will our bankroll make a mint here or will it be subject to a right royal roasting?

There are six reels of which the outside two can display 2 to 7 symbols and the inner four 2 to 5 symbols. Above and below those middle four reels there is a scrolling reel of 4 individual tiles only on which the Jewelled Wilds can appear. This arrangement means there is a minimum of 1024 ways and a maximum of 117,649 ways per spin on Royal Mint Megaways slot. The pays are 50x bet for 6-of-a-kind Purple Gems, 7.5x Red Gems, 2x Green or Blue Gems with six card values paying 1.75x for Ace down to 0.8x for the 9. The same as Bonanza as I said. Your scatters are similar too with Gold Ingots overlaid with letters in the order they appear and which can appear anywhere except the scrolling reels.

You may have been used to landing G-O-L-D on Bonanza but here you will be needing M-I-N-T to trigger the 12 free games that have an increasing multiplier for every winning action. Any scatter over this amount adds 4 spins to the feature and you can retrigger by getting 3 or more Gold Bars which now only appear on the scrolling reels in the free spins. Landing 3 will yield you 4 extra spins with 4 more spins for each one over 4. Given you could theoretically get 8 of them, that could mean 24 extra spins in one retrigger, but I doubt it! The spins take place over the background of a Gold Safe with the door open.

This is taken from Lil' Devil where 40 instances of being one scatter short will trigger an enhanced bonus feature. Here on Royal Mint Megaways slot it will take far longer, thousands of spins, because unlike Lil' Devil where only 2 scatters are needed for a single collection, obviously we need 3 here in the form of M-I-N. You have a ladder of 20 Gold Segments to fill either side of the reels and then guess what? You won't automatically trigger the enhanced spins, but will simply get a sticky 'M' added to the left of the grid meaning from thereon in you only need 3 scatters on the reels in the form of I-N-T to trigger the bonus. You enhancement? Well, you begin at 2x multiplier and each winning action raises it by 2x as well so some crazy potential there.

Royal Mint Megaways slot is a far more volatile version of Bonanza which is high enough in itself! The feature comes in about the same amount of spins on average at about 1/450 plays and the base game performs about the same. It seems they have taken some RTP from the basic 4-scatter trigger by only giving 4 extra spins for extra scatters in the trigger or retriggers as opposed to Bonanza's 5. This mean the enhanced Heartstopper spins have huge potential and are extremely volatile, in effect getting your multiplier up to say 10x or 12x far earlier than would happen if it were a basic trigger. The game has the familiar no-frills appearance, sounds and animations of BTG slots and our RTP is good at 96.48% - it needs to be. This game will appeal to the thrill seekers but be aware you may need a mint of your own to fund long term play on it...