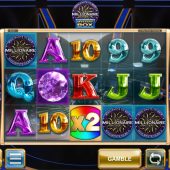 Millionaire Mystery Box slot by Big Time Gaming is the second game using the world famous Who Wants To Be A Millionaire trademark, after the Megaways original. The appearance is pretty similar to the older version with the same symbols and background of the Millionaire studio TV show and its music. This is not a Megaways slot so falls into the same category as Big Time Gaming's The Final Countdown slot and the equally volatile but highly playable Lil' Devil. So will this version of Millionaire actually box clever with out bankroll, or will it turn out to be empty?

We only get 5 reels of 3 rows each on Millionaire Mystery Box slot as on this occasion BTG have given us a 243-way game with no fixed pay lines and we can pay 20 coins right up to 20.00 per play and no feature buy option is present. The familiar symbols pay 5-of-a-kinds as follows: Purple Gem 25x bet, Red 3x, Blue 2.5x, Green 2x with six card values offering 1x down to 0.6x for a full way. Symbols are all single but there's far more going on here than just basic pays as we get 2x Wild Rainbow coloured symbols on reels 2,3,4 which can therefore offer up to 8x multiplier for all 3.

On the centre 3 reels, as well as those 2x Wilds we can land Question Mark boxes. As you may have deduced these will open to reveal a random symbol which can be any of the base game pays plus the Wild and even the Game Logo scatter. The symbols will be the same if there are more than one box.

Any win in the base game can be gambled on an all-or-nothing doubling ladder. You can gamble up to 5 times therefore multiply any win up to 32x if you were lucky enough to reach the top. Makes those small wins a bit more fun.

So having landed 3 or more Game Logo scatters you are taken to the free games screen. You get 7 spins for 3, 12 for 4 and 20 if you land all 5 scatters which would also pay you a handsome 200x bet! You begin with a 2x multiplier and a ladder to the left of the reels. The ladder has 12 stages including the starting rung and every scatter appearing awards 1 extra spin and increases the multiplier by 1x initially. Every 4 positions there is a Lifeline rung which is at 5x multiplier on rung 4 and reaching this awards 3 extra spins.

Millionaire Mystery Box slot seems to have a gentler base game and more frequent features than you may be used to from Big Time Gaming's titles. That said, the bonus is really hit or miss as it's volatile to say the least, with big rewards should you climb to 10x or more on the ladder. The appearance and animations are the same basic style we've become accustomed to from BTG with the mystery symbols adding a nice touch. The maximum realistic base game hit is 200x for the Purple Gems with 3 Wilds but on a 50x multiplier this would equate to 10,000x for one line if you really did catch the slot in millionaire-making mood. If you can't get on the TV show, maybe you should give Millionaire Mystery Box slot a go instead...