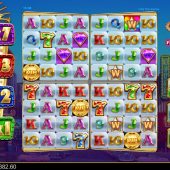 Slot Vegas Fully Loaded Megaquads slot by Big Time Gaming has simply done to the old Slot Vegas Megaquads slot what Kingmaker Fully Loaded Megaways did to the original Kingmaker Megaways game. It's still like a blend of the brilliant Donuts slot and funnily enough Kingmaker Megaways which I just referred to. The banjo player here from Bonanza slot plays a few different tunes like 'She'll be Coming Down the Mountain' and our background is of Las Vegas naturally. So what can we load up our bankroll with on this edition?

On The Reels...
As before there are 4 grids each of 4 reels and 4 rows giving 256-ways each on Slot Vegas Fully Loaded Megaquads slot. Symbols are seen stacked and single, including the Star Wilds on 2,3 and 4 plus Rainbow Single Wilds only seen reels 2 or 3 on each grid. It's actually possible to get 5 to 8-of-a-kinds if either the top two or bottom two grids show a Rainbow Wild either side, as then they join for that spin to become an 8x4 or 65,536-way slot! These 5-8OAKs are very likely because it randomly places a Wild on reels 4 and 5 too when it occurs.

Multipliers
Each win consisting of the premium 4 symbols on any grid, irrespective of the amount of ways in that win, will have a multiplier awarded. This is where our 'Fully Loaded' term comes into play. On the old version, 4OAK premium wins increased their colour multiplier, displayed on the left of the game, by 1x per occurrence. Now, as every spin starts, each premium symbol will get a random multiplier of 1-100x allocated which is applied if you get a win consisting of any 3 or 4OAK premiums.

Free Spins
Four VIP scatters shown as Gold Tokens anywhere in view on the grids gets you 6 spins, with +3 for each scatter above 4. You can retrigger them in the same quantities. As you will have guessed, the multiplier for the round now applies to all wins whichever symbols they are and is made from adding the 4 random multipliers present on the triggering spin. The ways increase as you play 2 slots of 4 reels and 8 rows of 4096-ways each. You could trigger the Rainbow Wilds feature too, which would combine these two 4096-way slots into a 8x8 slot for that spin of 16,777,216-ways!

Our View...
Slot Vegas Fully Loaded Megaquads slot has a RTP of 96.59% so is 0.02% lower than the original. So does the Fully Loaded mechanic improve things? Yes it does, as the RTP is not progressive any more, so each spin whether your first or last has an equal chance of awarding any given multiplier or prize. There is no requirement of a certain period of play in order to raise the multipliers enough for good base game pays and no more hoping that the feature doesn't trigger before the 4 added multipliers are substantial. Why BTG felt the need to make this amendment to the original Slot Vegas Megaquads, well I'm sure you'll have you own opinions. Mine is that it makes the game far more playable...