Rome Rise of an Empire slot 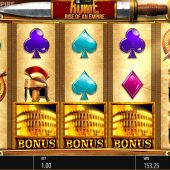 Rome Rise of an Empire slot will lead many people to assume it's similar to another Blueprint game, Napoleon Rise of an Empire which is an extremely high-variance 20-line slot supplied for them by Australian developer Reel Time. I wouldn't mind too much if that were so, but alas it isn't and I must say this with a slight sense of disappointment. The reels are laid out over a gladiatorial arena with a dagger laying across the top and some historical classical music plays in the background while we spin. Let's just hope our bankroll doesn't get put to the sword too.

We see 20 paying lines over 5 reels of 3 rows on Rome Rise of an Empire slot. I can only go so far here before you'll probably guess what game model this is, but here goes: The symbols appear both stacked an singly with the game logo awarding 25x bet for a 5-of-a-kind win as do the Wilds. The Gladiator or Woman award 12.5x, Helmet or Shield 10x with 4 card suits at 5x or 2.5x.

You have Golden Colosseum scatters on all reels of which you need 3 or more for the bonus round. Before we see these bonus possibilities I can tell you there's 5 random in-play features which can occur when the Lioness roars onto the grid. Yes, it's the tired old mechanic used in Ted, King Kong Cash, Mars Attacks! and The Goonies just to name but 4 of these generic slots of which there are at least 10 now.

There are a bunch of random Modifiers in this game, which are:

Bonus Boost - more scatters added to the reels.
Spear of Destiny - a win becomes locked and reels respin until no improvements are added.
Sword Strike - after a win the sword can slash the bottom row way allowing more winning symbols to drop. Can happen 1 to 3 times.
Legion's Glory - as reels spin, up to 3 Wild reels occur.
Symbolus Maximum - a scroll appears at the top, a symbol on the grid is selected to turn Wild in all instances. Another scroll then applies a multiplier.

You need 3 scatters and there is a ladder of 5 features and the wheel spins to land on one. 4 or 5 scatters will guarantee a higher feature or the top feature respectively. From worst to best:

Urn Riches - smash urns on a grid for stake multipliers of which 3 the same award that multiplier. Can reveal 3 game logos to get the top feature too or a special icon which will increase the list of multipliers.

Uprising - select castle turrets to destroy, when one is razed to the ground. you get a cash award for it, if one reveals the top feature you go to that afterwards.

Volcanic Cash Spins - unlimited spins with a STOP scatter on reel 3. Each time this appears, a multiplier will be added to a scale on the side which either ends at 6 or 10x for one final spin.

Empress Spins - 15 free games and a Stacked Empress Wild can appear on any reel and will become sticky, but the game will offer you a cash amount to remove it for the rest of the feature. If you refuse this you carry on hopefully adding more sticky Wild reels.

Big Money Bonus - the top feature where you pick coins on various maps of the city. These reveal good cash amounts i.e. 30, 50 or 150x bet etc. and the maximum win possible is 1000x.

You can gamble your feature if not the top one for the next highest up, but will get a rubbish cash award if you lose and no feature.

Rome Rise of an Empire slot is simply yet another game the same but with slightly different features. The mechanic is quite popular amongst some players but we are now into double figures from Blueprint of what is essentially one slot. The RTP is in a range of 94.51-96.64% and I would hope to see the higher end of that figure because there's little else to be grateful for here. The graphics and animations are run of the mill and of course those in-play randoms can keep some entertainment up between the bonus triggers but frankly I'm tired of seeing this type of slot from them. If they're this bereft of new ideas then perhaps it's no surprise they've brought a licence for producing Megaways games...

Rome Rise of an Empire screenshots 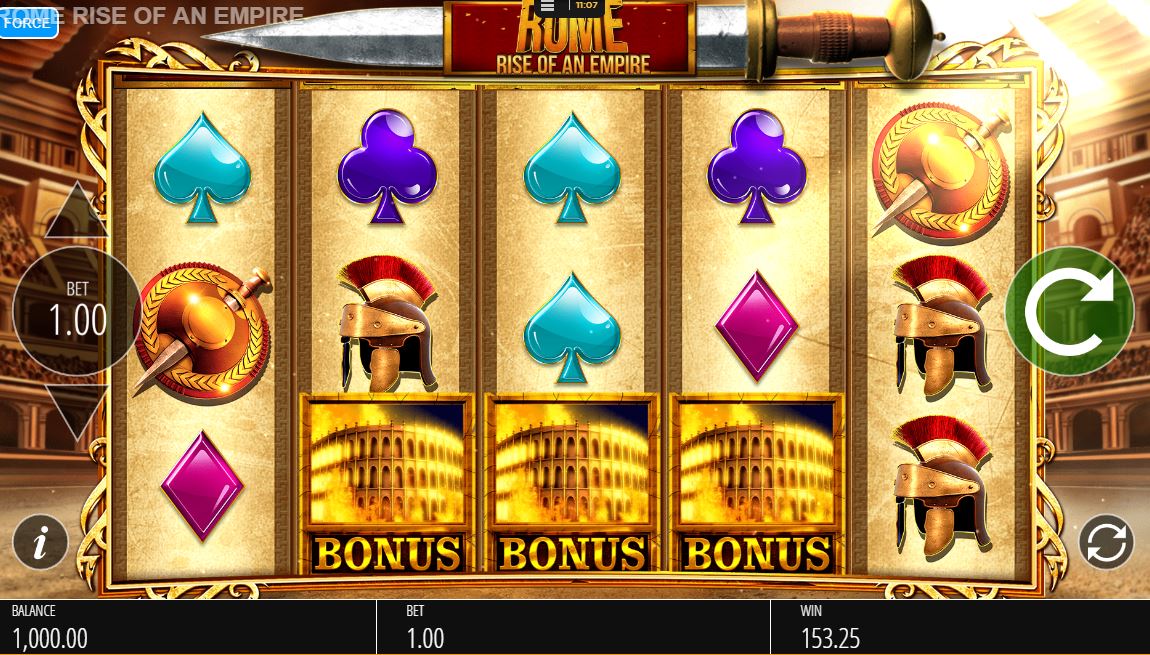