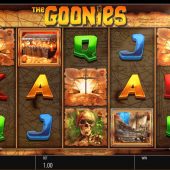 The Goonies slot is based on the 1985 American adventure comedy film directed by Richard Donner, about a bunch of misfit kids living in the Goon Docks area of Astoria in the USA. Blueprint do love film themed games and The Goonies joins Ted, Austin Powers, Top Cat and The Naked Gun in this ever-expanding category. The reels lie over the old treasure map the film is based upon and as expected soundbites and music from the movie dominate our soundtrack as theses intrepid kids seek One-Eyed Willie's treasure. In case you're wondering, One-Eyed Willie was a pirate by the way. Let's hope a profit for our bankroll isn't as hard to track down as Willie's gold though!

On the reels...
The Goonies slot presents us with 20 paying lines on a standard 5x3 grid and you'd be right if you'd guessed Blueprint have used their trademark multi-feature and random events mechanic here as they tend to do on movie slots. Symbols can appear singly or doubly stacked aside from the full-reel top-paying Skull and Crossbones which is the best 5-of-a-kind pay at 25x bet, the same as the Doubloon Wild. Treasure Chests and Ship award 15x with the Skull or Scales 10x and finally the four card values at either 5 or 2.5x for a full line. Pirate scatters appear on all reels for the bonus trigger but first the in-play events need a look!

One-Eyed Willie's riches
The Skull on the right of the reels may change colour and smoke which can signal a single-spin enhancement.

There are also two additional modifiers which can trigger after any losing spin. A scythe can appear which will rearrange the reels into a win, and also a cave collapse can occur to reveal a win.

One-Eyed Willie's bonus
If you see three or more scatters you will get a wheel to spin which lands on one of six different features. You can gamble unless you hit the top One-Eyed Willie feature but could land on a mystery cash award if you do instead.

Fratelli Hideout Bonus - pick keys which can reveal cash, or even a tunnel taking you up a bonus level.

Skeleton Organ Bonus - select organ keys to reveal an icon for a bet multiplier. Upgrade possible to higher values and 3 keys revealed raise the bonus level but 3 Skull and Crossbones end it.

Super Sloth Free Spins - The reels now have the Fratelli family and if a Super Sloth Wild lands in view any Fratelli symbols on the reels are turned into the top symbol. After the spins a pick-me can award 5 more spins, collect or the top feature.

Goonies Go Wild Free Spins - 5 free games and at the start of each spin after the first one of the 4 top reel symbols will become Wild. After the spins a pick-me can award 5 more spins with all top 4 icons Wild, collect or the top feature.

Inferno Free Spins - the Inferno moves from right to left, turning between 1 and 3 consecutive reels Wild. After the spins a pick-me can award 5 more spins, collect or the top feature.

One-Eyed Willy's Treasure Bonus - the top-paying feature! High wheel values will spin and then come to a stop awarding the corresponding cash amount. The feature continues until the booby trap is triggered on the scales and accumulated award is paid.

Our View...
The Goonies is quite typical of Blueprint's movie slots in that there is a lot going on and a wide range of events and features which many players find entertaining and put quite simply the formula works. If you've experienced this type of game before you'll have seen through the smoke and mirrors and realize that substantial wins over say 500x bet or better are very rare indeed but you do get a decent 96.00% RTP and many wins in the 10 to 100x bet range. The Goonies movie may or may not be to your liking which could affect how you perceive the slot but it is very well executed especially when the annoying kid appears! Not sure if the Goon Docks is a place I'd go to again, but you may want to pay a visit...