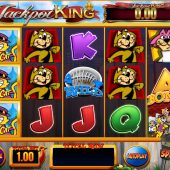 Top Cat slot is based on the classic TV cartoon made by Hanna-Barbera which had 30 episodes and ran between 1961 and 1962. Our feline friend was revived in two movies as well in 2011 and 2015 and these inspired the slot. TC (as he's known) lives down an alley with his pals and lives by trying scams on the street, to the disgust of his nemesis Officer Dibble. As one would expect we get the soundbites from the characters and the jaunty cartoon music as we spin the reels, which are set against the backdrop of this famous Manhattan alley and features TC's favourite hiding place, the trash can. Can these cats' scams make us some cash though, or will our bankroll be consigned to that dustbin?

The game follows the formula of all Blueprint theme slots such as Ted and The Naked Gun in that you get random in-play events and 5 features. Your icons are single bar TC himself who pays 20x for 5-of-a-kind followed by Benny and Choo-Choo at 15x and Brain and Fancy-Fancy pay 10x. Card values pay 4 or 2x for the 5.

Fancy Hot Dog's can appear on the fifth reel fully stacked. The Respin Bonus is triggered if it lands fully in view, with this Wild reel moving once to the left each spin until the angry Hot Dog Vendor grabs it back.

Call or Nothing random events occur in-play if TC appears from the dustbin, speaks to one of the gang and awards a random enhancement for the spin. These are:
Choo's Piano Wilds - as the spin Brain drops a piano on Choo's head, who sees stars and these become random Wilds.
Brain's Water Wilds - Brain will appear with a fire hydrant appearing by each reel, and attempt to open them one by one. Any he opens flood the reel and it becomes Wild.
Spook's Mice as Nice and TC will appear from the dustbin and blow his whistle, which summons mice who then rearrange the icons for a win. He blows again so this repeats, until Officer Dibble stops him and they all run away.
Benny's Colossal TVs - Benny appears, pressing his remote making a Colossal TV appear which will add a number of TVs to the reels which stop. Any TVs reveal the same mystery symbol.

You can also win any of the triggered Master Plan bonus rounds in Call Or Nothing!

Cash Picker bonus - choose from dustbins which reveal a stake multiplier until Dibble pops up and blows his whistle.

Maharaja Heist bonus - a board game with cash and multipliers until a character reveals a stop.

Construction Site free spins - 5 reels sets appear, with more Wilds on as they go higher. Climb up and earn extra spins for the next reel set by collecting TC stickers overlaying the reel symbols.

Diner free spins - unlimited spins and after each spin if a special scatter symbol lands anywhere is view on reel 5 the number on it removes some diner tickets but increases the multiplier too. Once the tickets have been removed the spins stop.

Dibble Free Spins - a special wild symbol appears on all 5 reels. When one appears it pays the win then roams around the reels for the remaining spins, if it collides with another it expands and turns the reel Wild for that spin.

Top Cat slot is packed with features as Blueprint Gaming do with their themed slots. The only problem is that they use the exactly the same mechanics and game template for all of them, and Top Cat is thus a clone of the more adult-orientated 'Ted' slot. The RTP isn't great at 92.49% and the base game pays pretty poorly while awaiting the rare 3-scatter trigger. You do get quite frequent random events though, but beware as TC may emerge from his dustbin and not actually call one of the other 4 to award their enhancement! That said, the formula isn't bad and can pay some considerable wins in the triggered features and if you like TC (as I do!) then the graphics and soundbites will amuse you. The Jackpot King random progressive is incorporated too if your casino is linked to it. I have to say 'He's the most Tip Top (slot), Top Cat! 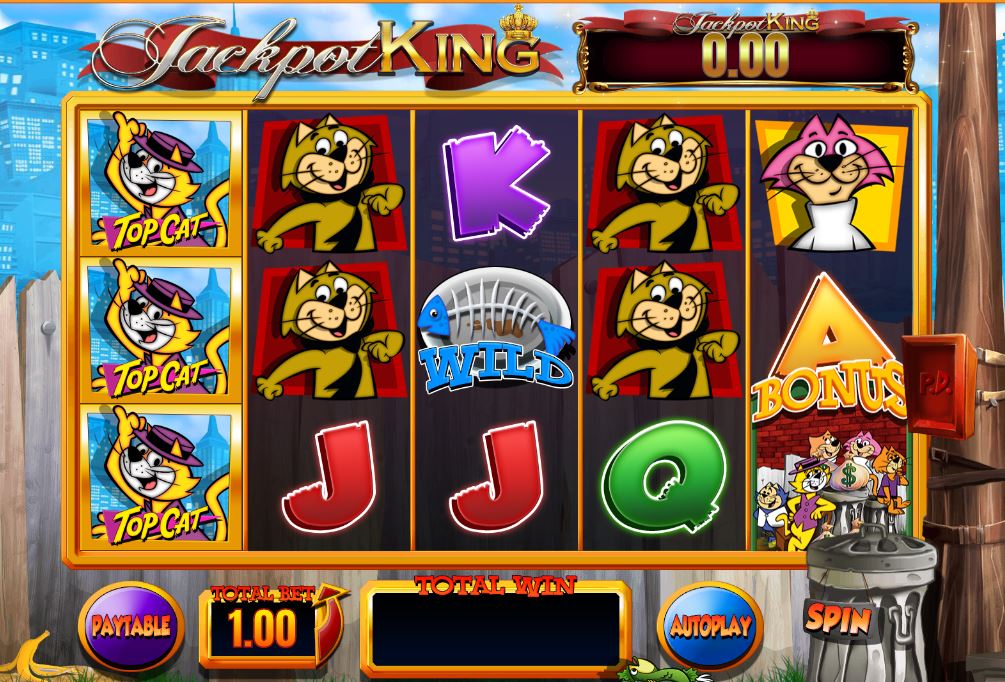