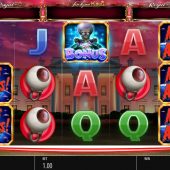 Mars Attacks! slot is a departure by Blueprint Gaming of late from churning out their variations of Megaways games such as Primal and Vikings Unleashed. We are back to the 20-line mechanic here seen in games such as Ted or King Kong Cash with all the various features both in-play and in the bonus rounds. Here we have a licensed Warner Bros. cartoon as our subject with weird space music and sound effects and symbols reflective of the 1996 Comic Sci-Fi film it is themed upon. The reels are set over a red night sky and the White House, but will it require presidential intervention to rescue our bankroll here?

Mars Attacks! offers us 20 paying lines over 5 reels of 3 rows each with the usual stacked symbols this format provides, with the exception only of the Green Alien Wild. That pays us 25x bet for the 5-of-a-kind as do the Game Logos, with the Red Martian and Ray Gun 12x, TV or Eyeball 8x with four card values at either 4 or 2x bet for a full line. As is usual with this multi-feature Blueprint model, we can get as many random in-play events as we can triggered features!

You may see the screen go red and the Spaceship appear above which will award one of 5 different enhancements.

Mega Shrink Ray - the reel symbols shrink, increase to 5 rows each and 3125 ways so no pay lines are necessary.

Abduction Beam - symbols are beamed up to the spaceship and replaced to improve your situation.

Expansion Cannon - a mystery tile is placed somewhere on the grid and will spread, to eventually reveal one symbol the same.

Sub-zero Laser - wins will be frozen in place and reels respin until no improvements occur.

You need to see 3 or more blue Boss Aliens to trigger a graded scale of 5 different features. You can gamble up the ladder by selecting a continent and if you conquer the Martian colonists with a 'Victory' reveal you rise up one position. If you lose at any stage beware! as you only get a paltry cash award! If you trigger with 4 scatters the lowest feature disappears from the ladder and all 5 scatters automatically trigger the top feature. In increasing order of value they are:-

Spy Hunter - simple pick-me to get cash prizes until 3 humans are revealed.
We Come In Peace - choose containers which fill tanks either side of the reels. The filled tank pays it's value plus either a multiplier or Big Money boost.

DNA Analysis - 5 free games on a 5x4 grid and 40-lines with expanding DNA Wilds overlaid. After each spin the Wilds in view expand by one row.
Martian Takeover - 10 free games with Roaming Wilds active. Roaming Robot may appear which makes the reel Wild and it moves off one reel to the left each subsequent spin until it disappears.

Final Stand - unlimited free games and is the feature you want! An advance Symbol can appear on reel 2 for Humans and reel 4 for Martians. Each time this will add to a progress bar with the Human one increasing the multiplier and Martian one eliminating symbols from the reels starting at the lowest. Spins end when one bar or the other reaches the maximum.

Mars Attacks! slot is really for the fan of the theme because it does very little else than other games of this mechanic do, of which there are many. The obvious benefit aside from liking the subject are the numerous in-play features, but the bonus games are disappointing usually unless you hit the top two. This is easier said than done when you spend a while waiting for the trigger only to lose the gamble for a poor cash award. The RTP is a reasonable 96.93% including the Progressive contribution plus the base game gives you a decent turnover too. Trouble is, you'll not see any astronomic wins when Mars Attacks...