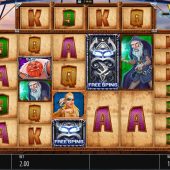 Vikings Unleashed Megaways slot is another Blueprint title under their license from Big Time Gaming at the rate of nearly one a month at time of release. Predictably the ideas are running out now and we have returned to the mechanic of their first attempt Diamond Mine here but with a variation of the feature gamble added. So we have essentially a version of Bonanza or Extra Chilli displaying a Viking theme (something NetEnt have opted for with their Vikings slot) which is reflected in a rather juvenile cartoon format with the grid laid over a Viking longship and some dramatic seafaring music as we spin. I was hoping for something more like BTG's Holy Diver, but alas Blue Print have opted for tried and tested. This all indicates that a significant raid upon our bankroll is imminent, so can we fight off these axe-wielding marauders?

The grid on Vikings Unleashed Megaways slot is one which Bonanza players will be familiar with as we get the 4 scrolling symbols above the centre reels with variable reels rows of 2 to 7 symbols thus giving us 324 - 117,649 ways on any given spin. Wilds can only appear singly on the scrolling reel but on the grid symbols may appear stacked and randomly stacks of shields can drop in on a spin which will all reveal a mystery symbol, a feature which we first saw on the aforementioned Diamond Mine.

The pays for a full 6-of-a-kind way range from 50x bet for the Warrior carrying a Golden Spear, Redbeard 7.5x, Lady or Wizard 2x with six card values awarding from 1.75x for Aces down to 0.8x for 9's. You can naturally see many ways on one spin given the format here so these pays can be multiplied many times. Scatters are in the form of monochrome runes and here is a slight difference to Bonanza - you can only get a maximum of 7 for 27 free games as opposed to 8 for 32 although you still need 4 for the basic 12-spin feature entry.

Having triggered the free games you will have the opportunity for a far 'safer' gamble than you may have seen on Extra Chilli. Here there are two circular segment gambles, one for the free games amount and one for the starting multiplier. The losing red segment on the wheel is only a tenth of the area thus indicating a good chance of winning the gamble but at any stage you will lose the lot if hitting red on either wheel! You can gamble to a maximum of 27 spins beginning at 10x multiplier from your basic trigger of 12 spins beginning at 1x and collect any permutation you've gambled to in between those extremes. The free games follow the standard Megaways format with an increasing multiplier for every single casacade action triggered by any win.

This again is a variation on what you could have experienced on other Megaways games. Instead of buying the basic 12 spins at 1x feature for 100x bet as your only option, here there are cheaper ones. You can still buy the basic 4-scatter entry as above, but you have the option to also buy 5 spins for 25x bet, 8 for 50x bet and 10 for 75x bet! This could work out well if you can successfully gamble them up to the more expensive triggers.

Vikings Unleashed Megaways slot is really on remarkable for the variable feature buy option. Otherwise there's nothing new here and it's simply Diamond Mine 2 in effect, although that game has proved popular with its slightly higher RTP and the mystery stacks in-play feature. Here the RTP is 96.50% although Blueprint tell us this can increase slightly to around 96.90% via use of the feature purchases. The music is OK but the theme's childish it must be said and I have noticed there seems to be far less picture symbols appearing during the free games which suggests the reels are different during them. I cannot say in all honesty Vikings Unleashed Megaways is a poor slot, but alas I can also predict with some certainty that this model is going to be flogged to death in the near future like our old friend Book Of Ra... 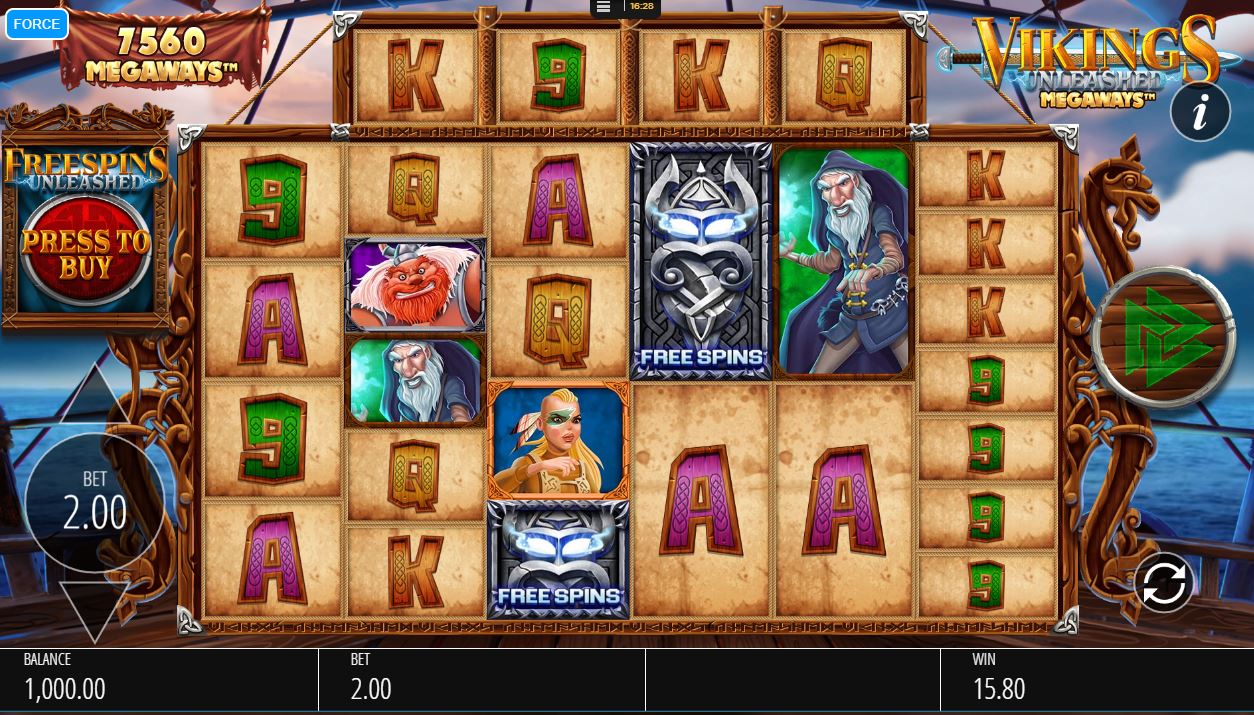