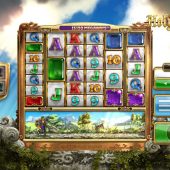 Holy Diver slot is very different from most of the Megaways slots first made famous by Big Time Gaming with games such as Dragon Born and Queen of Riches. Yes, Blueprint Gaming has now been licensed to make Megaways games and have made some pretty noticeable variations of the theme as with Diamond Mine and Genie Jackpot Megaways but this is something else!

The theme Holy Diver isn't about Cristiano Ronaldo turning religious or anything, but a song by former Black Sabbath vocalist Ronnie James Dio who alas passed away in May 2010 after a long solo career too. You will hear Holy Diver in the bonus round, but that's later. For now we have a storm brewing in the background and our reels set in a monument with dramatic music and symbol sounds you may heard in BTG's Donuts slot. We are accompanied by a brave and loyal knight as we play, walking along under the reels to help us on what can be a long and risky quest, but will he discover that Holy Grail to bolster our bankroll?

We get initially the same maximum ways as with Bonanza due to the reels being able to have any amount of rows appearing from 2 to 7, so 64 - 117,649 ways is possible. There is a difference from games like Extra Chilli and Bonanza here in that the reels don't have long stacks of 7 or more symbols on them and they appear singly, although 2 or more are possible on a long reel. The top pay is the same as Donuts, 15x bet for 6-of-a-kind Purple Gems, Red 5x, Blue 4x and Green 3x. The six card values pay 0.5 to 1.5x bet for a full way of 6 but there are no Wilds or scatters on the reels! Fear not though, our intrepid Knight will soon sort this out! Holy Diver does not have cascading wins either, so there are no replacement symbols in play here after wins are counted.

You will see a shield beside reel 1 and this is the same as the Knight carries in miniature. As he walks along, at least every 5 spins he will encounter a Chest of Fortune which he will smash with the sword. There are 4 different rewards he can uncover:

Gems - 1 to 3 can be revealed and these will start a thunderstorm and then be placed on the shield to the left, as we need to collect all 4 different coloured gems for the free games to trigger. Any gems on the shield will now also be visible on the one the Knight is carrying.

Sword Bonus which is Wild Reels - you can get 1 to 3 Wild reels added anywhere on the centre 4 reels, i.e. 2,3,4 and 5. These can also have a multiplier up to 7x placed on them so anything from 1x to 343x multiplier is possible.

Fireball Bonus which is single Wilds - these can be placed on 1 up to all 4 middle reels.

Standard Symbol Bonus - any card value can be selected, then all instances of it on the middle 4 reels turn Wild.

Now you won't need more than 5 spins for the Knight to reach the next chest and sometimes he might sprint instead of walking, so you can get them on consecutive spins.

Eventually your Knight will complete the set of 4 gems on his shield. When he does, you get 10 free games. From the outset this should take around 100 spins, maybe more or maybe less. Your 10 spins will have an enhancement which is that all gems appearing on the middle 4 reels will become Wilds during them.

As in the base game, your Knight still has work to do in these spins and here he will traverse the cloisters of a sinister-looking Monastery and slay some hooded evil Monks as he goes. They may give up a diamond when he does. The first 4 diamonds all reveal an extra spin each, but the fifth will grant you an 8-spin retrigger. Then the sequence starts again, so more extra spins and retriggers are possible.

Holy Diver slot has 3 levels of free games. The paragraph above describes level 1. You can 'play on' after Level 1 spins are awarded and aim for Level 2 spins. Your Knight now traverses a desert underneath the reels. Now, I must warn you that if you do turn down Level 1 the gems in the Chests of Fortune become less frequent but there is a reward for your perseverance, in fact two rewards. The gem Wilds in the Level 2 spins will all have a 2x multiplier on them AND the middle 4 reels can expand to give more rows so your grid goes to a maximum of 586,971 ways. If this happens, you can also have more than one Wild gem appear on any of the middle 4 reels unlike in Level 1. So win multipliers of 16, 32 or more are possible.

Level 3 is simply a case of turning Level 2 down and continuing the Knight's journey under the reels, this time with even less frequent gems in the Chests of Fortune and in a fantasy land setting, having now left the desert. You have to take Level 3 free games when triggered after all 12 gems have been collected. Yes, the Wild multiplier for any gems on reels 2 to 5 in these free games is now 3x and you see more frequent reel expansions than in Level 3. Huge multipliers are possible and that is your reward for your bravery!

Holy Diver is possibly BTG's best game to date as it diverts any criticism of only providing high-variance games. You can choose just to play on Level 1 and get regular and lower-volatility free games or go for potentially more lucrative levels. There is no bonus-buy either which will please the responsible gambling critics and the RTP varies little whichever strategy you take as it's in the range 96.39-96.54%. The graphics are good as is the music with some great animations as the Knight opens the Chests of Fortune, which in itself is a great imaginative touch because not only does it look good but you get very regular enhancements to spins. There are some huge wins possible in the bonuses when you go for the higher 2x or 3x ones and the base game can produce big results too, more often then not when a Chest is opened on the same spin where you have landed the full 177,649-way reels. Holy Diver it may be, but you'll not get a sinking feeling if you play this superb slot...