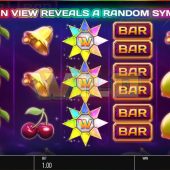 Star Spinner slot is a departure from the usual complex model packed with features Blueprint use for games such as Angel Princess and The Naked Gun; here we get a far simpler model and in fact have what you could term 'Starburst on steroids'! The old-style fruit machine icons spin over a dark purple background with a futuristic synthesized soundtrack and although basic, Star Spinner can be quite fun to play if you are indeed a Starburst aficionado. Can these stars prove to be stellar for our bankroll though?

The grid is the usual 5 reels of 3 rows each and we have all the symbols stacked so they can fill the whole 3 rows on any reel. The first hing to note is the increased potential this game has because the top Diamond icon pays 100x bet for a 5-of-a-kind win thus doubling the top prize on Starburst of 500x for a full screen of Bars to a huge 1000x! There is quite a drop down to the next prize though, Gold 7's for 10x, double Bars or single Bar for 8x, Bell or Melon for 5x and finally the dross represented by Lemon or Cherries for 2.5x for a full line.

So we have an addition to the Netent format with Blueprint having added a stacked mystery symbol in the form of a glowing Red Dwarf Star onto all the reels. When these land in view they will explode to reveal a similar icon under each Red Star which may or may not help you to gain a win.

You won't be surprised to learn that a Rainbow Star can land on any or all of the centre 3 reels which is an expanding Wild. This will award any pays and then remain in place for a re-spin. If another occurs then that sticks in place too for another re-spin and wins are paid. If the third Wild comes in a large pay would be likely and then you get a final respin with all the centre 9 positions Wild. You could get two land at once or even three, which would reduce the re-spins to two and one respectively. The reels re-spin over a spectacular Rainbow laid on the centre reels, so the effect is quite captivating.

Star Spinner can be linked to the Jackpot Strike progressive network at many casinos. Randomly you may see the reels overlaid with 4 Crowns, if the 5th. lands on this slowed-down spin then you play the Jackpot Strike reels which only have Crowns on them, and these keep spinning until no more Crowns are added. The jackpots are on a ladder and if you see all 15 Crowns you win the King. Lower positions award the Royal or Regal or you may just earn a smaller cash prize for not reaching those levels on the ladder.

Numerous developers have copied the Starburst slot game model but few have actually tried to improve it. With Star Spinner Blueprint Gaming have made what is otherwise a tedious game mechanic quite playable with the improved visuals and the addition of mystery icons. The RTP is very good at 96.47% and Wild occurrences and smaller wins are very frequent despite the improved 1000x top prize. A pretty straightforward and simple game but which I could find myself playing again, chasing those Diamonds in the sky...