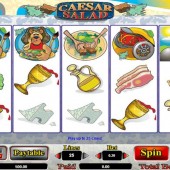 The original Caesar salad originated from an Italian immigrant in America called Caesar Cardini who first mixed lettuce, croutons, parmesan and olive oil to create one of the most famous salads in the world.

Established slots developer Amaya are not ones to let a little history get in the way of some slots fun, and their take on the Caesar salad has actual Caesars in it. Yep - those ones from ancient Rome.

A 5-reel slot with 25 paylines and coins ranging from $0.01 to $10, Caesar Salad features a Roman centurion, a goblet of wine, olive oil, grapes, and a bowl of Caesar salad.

The top payer at 7,500 coins is Caesar when you hit five across the reels  but Caesar's wife also appears, as does a lion from one of the Colisseum shows (who looks very peeved at the thought of having to eat a load of green leaves) and a chariot.

Caesar acts Wild and substitutes for all regular symbols other than the Scattered Caesar's Wife. She awards 10 free spins if you land three or more of her on the reels anywhere.

This is one of those cheap and cheerful slots you get from Cryptologic from time to time. The graphics are OK, the animation nothing special, but the bonus round can prove pretty lucrative, especially with the 3x multiplier. I found myself hitting the feature fairly regularly and then retriggering it while I was playing out the spins.

In fact, in appearance and tone, the game is pretty similar to Amaya's drinking-fuelled online slot, Oktoberfest and the animal-themed slot with simple gameplay and graphics, Fat Cat, also from the same developer. As for Caesar Salad, like the salad where it took its name the game will not be to everyone's taste, but for a few hours spin action it gets the Emperor's thumbs up.