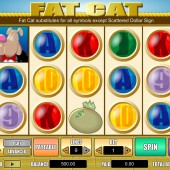 Fat Cat slot takes the popular phase for describing overpaid bosses and makes a game about it, but using cartoon cats as symbols. Confused? So was I when I first set eyes on this Amaya game. Part of Amaya's portfolio of simple 5 reel, 9 pay-line slots, Fat Cat is an animal-themed game with simple graphics and simple gameplay.

You Know the Score!

If you've experienced the tropical-themed Coral Cash slot or the party antics of the Oktoberfest slot, both from the same developer, you'll get the idea. There are cartoony icons, a nice old-fashioned sound as the reels spin, and an easy Advanced setting option to add the Autoplay function.

Fat Cat is - as the name suggests - based around the world of cats and dogs, but these canines and felines are 'blinged up' and showing off their wealth. So, on the reels we get a pampered kitty with diamond necklace and low-cut top, a bulldog butler in bow tie and tux, and the key figure of the Fat Cat himself.

All shades and chunky gold chain, the Fat Cat pays out 5,000 coins when you land five symbols on the reels. He also acts as the Wild and substitutes for all regular symbols other than the Scatter. Making up the symbols is a pile of cash, a money bag, a big gold dollar sign plus some generic 9-to-Ace icons.

Pick Your Money Bag to Win a Prize

Hit three or more gold dollar Scatters anywhere and you will trigger the bonus feature. Eight moneybags will appear on-screen, each containing a prize. Keep picking until all eight have been revealed.

Fat Cat is a nice little slot that can award some OK wins but will hardly set bigger bettors' worlds alight. Unlike some of the similar Amaya slots out there, the coin bets are a little higher in this game, with a minimum bet of $0.10 and a maximum of $5.00 per coin likely to keep everyone happy. Personally, I prefer IGT's Kitty Glitter or Aristocrat Miss Kitty for my fix of pampered pussycats.