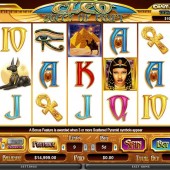 Cleo Queen of Egypt is a slot with a novel approach, focusing much more on jackpots rather than bonus wins. As the name suggests, this is yet another Egyptian-themed slot with similarities to IGT’s Cleopatra 2 game. I personally don’t think it competes with the IGT Cleopatra slots, but that is a matter of taste.

This video slot has a jackpot linked to each of its 9 pay-lines, which generally vary from between $500-$4,000. These can be triggered to pay out at any time regardless of the coin size you are playing. You need five Cleopatra symbols on a payline to hit the bonus - which is admittedly pretty rare - but they do get won as I see them changing when I play this slot.

Pick Your Win but Avoid the Trap in the Pyramid Bonus

There is also a bonus game in Cleo: Queen of Egypt, but it is not overly exciting. It is triggered by three pyramid Scatters.

You then visit a new screen and pick prizes which are hidden under Egyptian symbols. There are cash prizes and multipliers to pick, a bit like the track bonus in Frankie Dettori’s Magic Seven slot from Playtech. The feature is ended when you pick the trap, which collects up your winnings.

The decision to make a Cleopatra themed-slot was probably a good idea by the developer, as it is an incredibly popular theme. However, I don’t think this game is in the same league as slots of a similar theme by other game makers, examples being; Aristocrat’s excellent Queen of the Nile or the uber-popular IGT slot Cleopatra. The best thing Cleo Queen of Egypt has going for it is the unique jackpot feature, but that is hard to win.