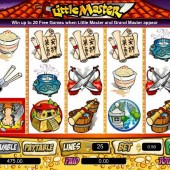 Ploughing a similar furrow in the way of amusing online slots based in the Orient like Cryptologic’s Fumi’s Fortune or Betsoft Gaming’s stereotype-pushing Sushi Bar, Little Master – also from experienced slot developers Cryptologic – takes a rather comic take on the world of martial arts and throws in a kick-ass pig for good measure. Kung Fu Panda, anyone?

A 5-reel, 25-payline online video slot, Little Master has a cherubic Shaolin martial arts student as its main character, while his all-knowing master looks on. There’s also a top-paying dastardly pig who pays a jackpot of 5,000 coins if you hit five across the reels.

Making up the generous-paying symbols on the reels are a Shaolin temple, a Pagoda, Buckets of Water, Swords and Pipes, Scrolls and Pots of Water, plus a Bowl of Noodles and some Chopsticks.

The Little Master – he’s the little dude in the orange karate suit – and the Grand Master are both Wild, our little friend appearing on Reel 2 only and his wise teacher on Reel 4 only. Both substitute for all regular symbols in the game other than the Scatter.

When they appear on their respective reels simultaneously, however, they will explode into action in the Grand Master Challenge.

Here, you’ll be transported to a second screen where you get to pick from three challenges for Little Master to try. Depending on what you pick he will award you up to 20 free spins, and all free spin wins are doubled.

Although landing both Wilds on Reels 2 and 4 sounds quite tricky I found it happening fairly regularly and I even managed to re-trigger the spins twice (giving me 26 extra spins on my original 13).

Hit the Brick Symbols to Pick Your Prize

I found Little Master to be a really satisfying online slot. The reels are smooth and spin with a nicely-recreated ‘one-armed bandit’ sound.

The animations are smooth enough and everything is rendered in a colorful cartoon style. If everyone wasn’t Kung Fu Fighting before they played this slot, they soon will be.