The Treasure of Isis slot

The Treasure of Isis slot review 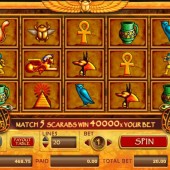 Here's a little-known fact: if you laid all the Egyptian-themed online slots end-to-end they would stretch to the moon and back - twice. Not only are there a plethora of slots out there based on Cleopatra, Tutankhamen and the land of the Pharaohs, but they also vary wildly in terms of quality and prizes.

Slot developer Cryptologic's 5-reel, 20-payline The Treasure of Isis is more or less in the middle of those two camps: it offers a tasty 40,000 coin jackpot in the base game but the symbols and animation on its 5 reels are fairly basic. What's more, it has (and I'm not necessarily complaining here) an atmospheric Indian soundtrack over the top.

On the five reels everything is as you'd expect from an online slot with a Thebes theme. There are gold scarab beetles, pyramids, ankhs, Isis birds, eyes of Ra, jugs and hieroglyphics.

The slot urges you to 'win big with the Scarab' and that's just what you can do by hitting five across the reels. For that, the 40,000 coin jackpot is yours. Three sparkly rubies triggers the game's bonus feature - a relatively straightforward free spins round.

First you have to direct your Scarab Beetle towards one of four treasure boxes - within each one contains a different cash win amount and spins total.

If you're wondering what I've done with my paragraph on the Wilds, there are none in this slot. That would, you'd think, mean lots of unfruitful spins but I found nice wins cropping up a lot (four and five-symbol combos plenty of times).

Having said that, the bonus round barely triggered for me, and the reels just continued to tempt me with one or two Scatters every other spin. When it did, I found a meager 1 spin waiting for me within the treasure box.

There is so much choice out there when it comes to Egyptian-themed slots online you aren't left wanting. Is The Treasure of Isis the best? Not really, but it isn't bad to play. Check out the thrills of IGT's classic Cleopatra slot, while Novomatic's epic treasure-themed Book of Ra slot comfortably replicates land-based casino thrills in an online game.