Guardians of Fire and Ice slot 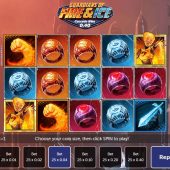 Guardians of Fire and Ice slot is set in a superhero fantasy world of cartoon graphics against a background of an apocalyptic Metropolis. Various Superhero weapons and adornments make the icons which are placed on a 5 reel by 3 rows standard format. Powerful and dramatic doom-laden music and sounds accompany the reels as you play and find out the role of both the Fire and Ice Guardians. You may have visions of Netent's Warlords - Crystals Of Power slot or even Yggdrasil's Super Heroes when you see the appearance and symbology.  But will you find this game hot or cold?

There are 25 pay lines and we have the 'cascade' format on the reels in that any winning combinations will explode away and new symbols descend to replace them.  Unlike Gamesys' Monopoly Rising Riches though there isn't an increasing multiplier on the left but you do have a scatter counter - once 4 scatter symbols have been accumulated (these too explode off of the grid when they land) you will be awarded 5 free games or 7 if you accumulate 5 up to 13 for 7 or more. The best paying 5-of-a-kind is the Ice Guardian at 20x stake, the Fire Guardian at 10x down to the lowest ring icon at 2x bet.

There is a Wild too which doesn't multiply but if it lands in the centre position of the grid, it will become a 'Fire Wild - this means that it sticks in position and increases power by one Wild for every successive winning combination it's involved in. When there are no further winning combinations, the Fire Guardian on the left of the reels zaps a Wild onto the reels for every win that occurred before the first dead cascade. So if you had 4 wins with that sticky Wild, before the wins stopped, you will see 4 Wilds added to the reels on the left. These will not stick, but just pay as normal Wilds until there are no further wins. You can though get the fire Wild again during this spin.

When 4 or more scatters land, or are accumulated in successive cascades, you will have 5 or more free games. Actually, it's not a 'Burning Bonus' but more like a brittle one as we have the Ice Wild in these games, and the Ice Guardian on the right of the reels. Each spin you are guaranteed to see the Ice Wild land in the centre position, and it will stick for a minimum of 2 wins then it starts to thaw away. If though you land any other Wild(s) anywhere during the freeze or thaw then the Wilds in view become sticky for at least another 2 spins.

Guardians of Fire and Ice slot is another quite original concept from gamesys. The graphics are detailed and crisp and sounds well designed to accompany the theme. Fantasy slots may not be to everyone's liking, but I found the base game quite playable. The volatility of this 94.82% RTP game is quite low and it can be frustrating waiting for the scatters to accumulate and the free games won't pay a huge amount. The very quick bonus round really lets the game down though and has very limited potential, which is where this slot turns me from hot to cold very quickly.