Journey to The West slot

Journey to The West slot review 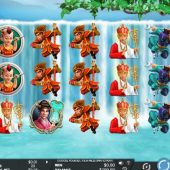 Journey to The West slot is based on the classic old adventure story of the same name and Genesis have spared no expense on the quality of the graphics, soundtrack and animations here. Transparent reels over a waterfall and bordered by trees set the scene for our intrepid prophets and some smooth and dramatic classical music scores accompany our play as we head on our way West. Journey to The West combines two other Genesis games namely Wu Xing and Game of Swords so will this be a safe trip to take our money on?

The game is pretty simple until we get to the features, none of which need scatters to trigger hence the lack of them. There are 25 pay lines over the 5 reels of 3 rows and all icons are stacked on all reels so the 5-of-a-kind pays are naturally low: 4x our 25-coin bet for Wilds, 1x for the Monk, 20 coins for Monkey King, 15 coins for the Pig and Sandy. Those are the 4 prophets, and there are 3 enemies paying 50 for the Bull, 40 for the Queen and 30 for the Devil. A Lotus Wild may appear on reel 3 and if on its own expands, sometimes adding reel 2, 4 or both to it.

Usually it appears in the centre row with a prophet either side and will trigger a single spin prophet feature in each case:

Sandy - typhoons all enemies on the grid into Wilds

Pig - jumps off of reel 3 into the water and splashed Wilds onto the grid.

Monkey King - turns the grid into 15 tiles which you pick from until you get one of all 3 enemies, getting cash for each. If you see the Monkey King he reveals all and you get the all the prizes!

There are Golden Peaches which can randomly overlay symbols. These are added to the tree to the right above the reels and when 7 are collected, next time you see the Lotus Wild on reel 3 the Monkey King goes to battle the Skeleton Queen, also known as Baigujing. You have a power bar and Baigujing has a life bar. You will have enough power to defeat her once and win the first level and win a small cash award, but will not get any further unless you get some random help after some of your attacks. You may get an instant kill which then pays all the coins you would have earned in one go, the same again but with 2 extra bars added to your power meter or finally an instant kill with one power bar added but a coin award of 1 or 2 credits too. You won't win much but it's great fun!

Journey to The West slot shows some great graphics and animation detail and you'll not find too many games more spectacular on the eye! The RTP is good at 96.10% and so are the returns in the base game, mainly via the reel 3 Lotus Wild features. You won't win a great deal on any of the features though as the volatility is quite low but it's not unusual to get a succession of 25-75x bet Lotus features which builds up a nice bankroll as you spin. I can therefore confirm there's a good chance that if you join them on their journey, you'll say goodbye to these prophets with a profit...

Journey to The West screenshots

jouney to the west slot logo 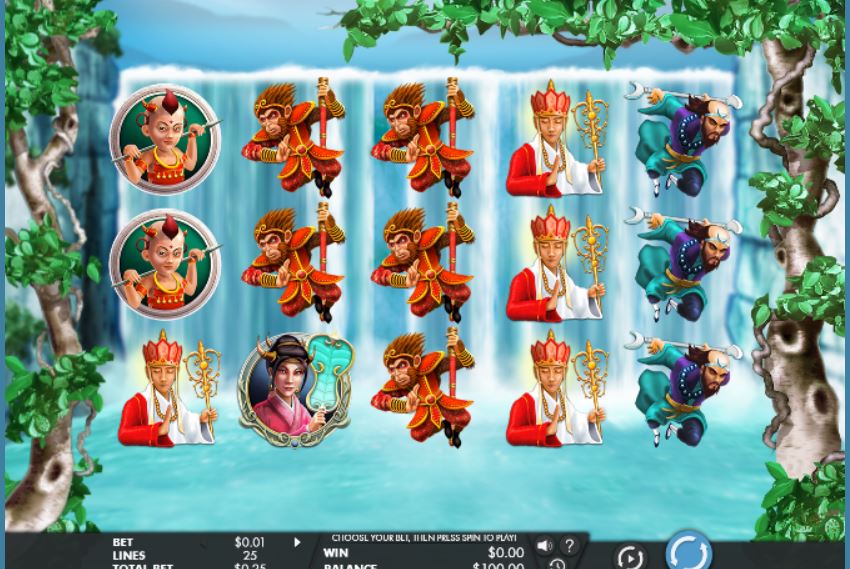 journey to the west slot game