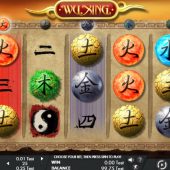 Wu Xing slot here is not to be confused with a game of exactly the same name by Blueprint Gaming! Wu Xing means simply '5 Elements' in Mandarin Chinese of alternatively the '5 Phases'. And that is exactly what we have here, the 5 picture symbols being a representation of Fire, Earth, Metal, Wood and Water on this 25 pay line 5 reel game. Even the card symbols here have Chinese characters to represent them and like the rest they are all single tiles, and background is an ancient scroll.

There are Wilds appearing on reels 2 to 5 and predictably Ying Yang gets an appearance as the game's scatter. There are scatters on all reels and the 5 elements all pay 16x stake for 5-of-a-kind and the card symbols 2.5 or 3.75x for the lower 3 and higher 3 respectively.

The first item of real interest is the game's in-play feature - each element is pictured above one of the reels, and these become highlighted if they appear on that particular reel. If you land all 5 elements on their corresponding reels you trigger a bonus game. Simply pick an element and you will battle the other 4 in turn, if you get that far! You have a Life Meter and you are represented on a graphic to the left of the display and the first element you fight on the right.  The round ends when all 4 elements have been neutralized (or you have!) and wins to that point are paid.

Three or more Golden Gong scatters triggers 10 free games. Again you select an element then the game selects one too. Whenever it lands it will transform into your element before wins are paid after any spin. If you land 2 further scatters, the game chooses another element to transform into your element, until possibly all the elements are transformed into your original choice. There's no retrigger but there are many elements on the reels with 1, 2 or 3 possible on any reel.

Wu Xing slot has decent graphics and sounds and is low in volatility. The free spins and battle rounds show some originality, until you recognize it is a copy of Genesis Gaming's Game of Swords slot. Oddly though, Wu Xing slot only has a 95.12% RTP (pretty low nowadays) which is over 2% lower than Game of Swords! Why this is? I don't know given that the games and pays are pretty much identical. For that reason alone I would steer clear if I had access to the alternative. Five Elements, and I doubt I'll be going near any one of them...