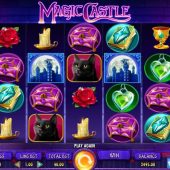 Magic Castle slot joins the growing list of 40-line , 5 reel, 4 row games from IGT, something that typically puts me on "clone-watch". However, my initial fears are quickly extinguished and I can sense this is going to be something very impressive from IGT - I haven't said that for a while! Magic Castle has simplistic graphics with a dark stone vault forming the background and uses stacked symbols as well as single, which can be 2, 3 or 4 rows high. The characters are the Lady of the Castle, Leonora plus various animals of mystery like the Wolf and Black cat. Books, candles, goblets and other items befitting an ancient castle make up the other icons and we are given a gentle medieval musical score in the background.

Leonora is the best paying icon as she is Wild and appears only in stacks of 2 although she does the same thing when appearing with just one half in view - adds a random multiplier after a peal of thunder to any wins whether she forms part of them or not. If she appears on 1 reel the multiplier is 2-10x, if on two reels 3-10x and so on up to 6-10x if appearing on all 5. Leonora is also the highest-paying 5-of-a-kind too paying 25x stake, the Wolf and Black Cat 10 and 7.5x respectively down to the goblet at just under 2x stake.

Ah yes! That Wolf and his pal the Black cat - if they appear on reel 5 singly overlaid with 'Wild' they will transform all other instances of themselves on reels 1 to 4 into Wilds too along with a loud howl or meow. Silhouetted by the moon, we have the Magic castle on the centre 3 reels and this will trigger the game's free spin bonus.

If landing your 3 Castle scatters on the middle 3 reels, you will certainly bring some light into your dark surroundings, as you will get 15 free games at minimum 2x multiplier. If Leonora appears in view when you trigger these, she gives her multiplier to you too, so you would actually get 30 to 150 spins via the 2-10x possible! The enhancement in the bonus is that Leonora doesn't need to appear to give the 2-10x multiplier on any wins, but if she does your get the same boosts as in the base game, described above. The same applies to any retriggers - you get 15 spins multiplied by the standard 2-10x or if Leonora appears with the scatters, her multiplier will be awarded. The end result is that any feature trigger and subsequent retrigger means at least 45 free spins. These have big hit potential and are rarely disappointing.

Magic Castle slot is vastly superior to most IGT games of the recent era, as they seem to have the math model and variance spot-on. You don't typically get the flashy graphics typical of developers like Netent and iSoftBet on IGT slots, but in this case this does not detract from the fun and potential of the game. Visually and aurally the game is easy on you and has a typical IGT range RTP of 92.17-96.08%. Multipliers to Leonora wins in the base game can be lucrative when you have multiple line pays via the stacked symbols, but the main positive is the free games - all players like free spin bonuses and here you can literally have huge numbers of them in any bonus with Magic Castle's unique quirk of possibly multiplying them as well as the wins, a nice touch in the design. There's definitely treasure in the vaults of this particular castle and I plan to explore it more... 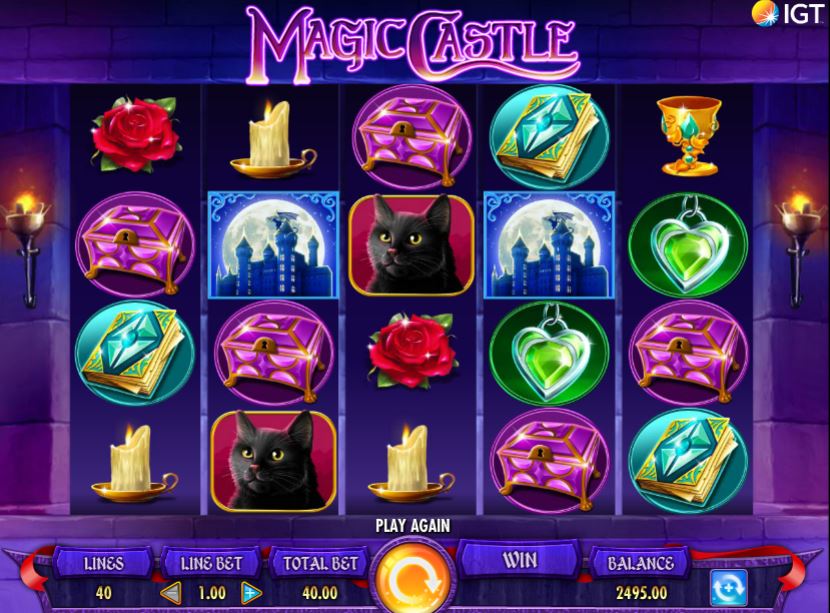