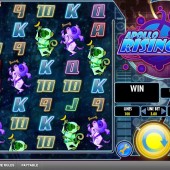 Space... the final frontier. Also, the setting for renowned slots developer IGT's new slots title called Apollo Rising. Apollo is one of the most pivotal Gods in Greek mythology. He is the God of music, poetry, art, archery, oracles and countless other things. In fact, I wouldn't be surprised if he was the God of slots too! It was from Apollo that NASA gained the inspiration for the names of its rockets during its space program during the 1960s and 1970s.

Apollo Rising is a 5 reel, 100 payline slot from IGT that takes influence from this Apollo space program. The reels are set against space with shooting stars and galaxies passing in the background with a futuristic soundtrack playing as you spin.

Symbols present on the reels include a red space man, a yellow space girl, a green space monkey, a blue space dog, and the regular 9-through-to-Ace symbols. It is also interesting to see that the usual three rows on the reels are replaced by an extended eight rows so there are more symbols appearing on each spin. A number of the non-regular symbols cover more than one position on the reels too so act as Expanding Symbols.

An Out of This World Wild

The Wild is represented by the flashing Wild icon. It has a different role to play compared to standard Wilds on other slots. It acts as a trigger for the Rising Re-Spins Bonus. It only appears on reels 2, 3, and 4. When it appears it will turn the entire reel it has appeared on Wild.

Earn up to 3 Rising Re-Spins

Unfortunately, that is it for Apollo Rising. I have to say that when I saw how the Wilds worked I got very excited. It was nice to have Wilds that didn't just substitute for other symbols and actually helped to trigger a significant bonus feature. Sadly, it seems that the depth of the slot has suffered as a result and additional bonus features such as free spins and a Pick 'em Bonus have been left out. That is a huge shame because otherwise this slot could have really been something special. After a series of poor releases from IGT, the developer had won my favour once more with their superhero-themed Natural Powers slot. This, despite the step forward in the innovation department, is actually a step backwards overall.