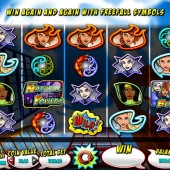 Cartoons and superheroes have long been a mainstay of slots titles online and this release from Las Vegas-located developer IGT can be added to that collection with comic book fans also set to be drawn in by the style of this slot.

Natural Powers is a 5 reel, 40 payline slot that looks like it has been inspired by a cross between the Disney movie Big Hero 6 and the more adult-themed movie Kick-Ass. The comic book graphics are similar to those seen in a couple of Cryptologic slots such as the below-par Wonder Woman slot and the impressive The Flash – Velocity slot. However, I should emphasize that you should never judge a book, or slot, by its cover and the similarities between these slots end on the aesthetics front.

The symbols on the reels reflect the characters involved in this slot. No, this is not a slot based on Captain Planet but the characters include Earth, Wind, and Fire... and Ice... sorry disco fans, you almost had your fix there. There are also a couple of symbols that combine the four elements.

The Wild symbol is represented by an flashy Wild icon that is presented in the style of the “Pow” “Bang” and “Smash” graphics that you would have seen in the old-fashioned Batman television series back in the day. It substitutes for all other symbols, except the four main character Bonus symbols, to complete winning combinations.

Freefall Symbols are Back!

Natural Powers also comes with the action-packed Mystery Features. This is randomly triggered after any spin when the Freefall Symbols feature has occurred. There are five Mystery Features that might be triggered randomly.

Watch as the Wind Blows Symbols Away

The first is the Wind Mystery Feature. The Wind character will appear on the reels and blow away all of the Fire, Ice, and Fire/Ice combination symbols. Once these symbols disappear they will be replaced by symbols due to the Freefall Symbols feature.

Feel the Heat as Fire Burns

There is also the Fire Mystery Feature. This feature will see the Fire character appear on the reels and proceed to burn all Wind and Earth plus the Wind/ Earth combination symbols from the reels. This will allow them to be replaced by Freefall Symbols with more potential winning combinations being formed.

Look Out for Earth Removing Symbols

The Earth Mystery Feature will trap a random pattern of symbols and remove them from the reels. This will leave a number of empty positions on the reels that will need to be filled by symbols falling down via the Freefall Symbols feature.

If the Ice Mystery Feature is triggered then the Ice character will freeze away a select pattern of symbols across the reels, in a similar way to the Earth Mystery Feature, leaving empty positions to be filled by the Freefall Symbols feature.

Earn up to 15 Free Spins and a 10x Multiplier
Finally, there is the Super Team Mystery Feature and this is the key to triggering the free spins bonus round. You will need to hit two Bonus character symbols on the reels and then have a third Bonus character symbol appear on the reels via the Freefall Symbols feature. You will then need to select one of the four main characters to decide how many free spins and multipliers you win.

Natural Powers has a lot going on. The Freefall Symbols feature is something that is always a big aspect of an IGT slot for me. However, with this slot they have gone even further and included randomly triggered Mystery Features and a free spins bonus round. From my time playing it, the pay outs were frequent and not too large but I had a lot of fun playing this slot so I can handle that. I can't help but feel there is a potential big win in this slot for someone and at the very least I can see this being a big hit across casinos for its high-octane spins. If you want more Freefalls Symbols fever then check out IGT's superb Transformers - Battle for Cybertron slot.