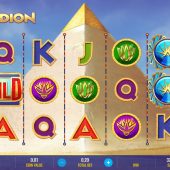 Pyramidion slot by IGT features this developer's favourite theme, Egypt to add to games like Cleopatra Plus, Crown of Egypt and Golden Egypt although IGT have tried to make this game a bit more modern. To that end we have transparent reels over a simple desert pyramid background and I won't need to tell you the type of music we hear as the game plays. The name seems to imply that this famous structure can have a positive effect on our bankroll, or like the old pharaohs will it end up entombed forever?

.
We get 20 fixed paying lines on Pyramidion slot and symbols appear singly with the exception of the highest Blue Sun which can appear stacked to 3 high and pays 25x our 20-coin bet for a 5-of-a-kind win, although the single Wilds pay 50x. The other symbols are Scarab and Asp both paying 10x, Purple or Green Disc 5x with five card values offering either 4x or 2x for a full line of 5. We see scatters on reels 1,3 and 5 although two different free games bonuses can result as we'll see shortly. It's the Pyramids we need to check out first, as these contain a few hidden treasures.

Sunbeam Wilds - Sunbeams shoot down on the reels adding Wilds.
Waterfall Stacks - Waterfalls flow over the reels revealing stacks of the same symbol.
Obelisk Wilds - Obelisks rise from below the reels, like the Champagne feature on The Finer Reels of Life slot, giving 1 to 5 Wild reels.
Mighty Reels - the centre 3 reels turn into giant 3x3 colossal symbols.

Tomb of Mystery - you start with reel 5 Wild and a spinner on top of it - it will either move one reel to the left or stick and increase its multiplier by 1x. The round ends when the X icon appears on the spinner, which can only occur when its on reel 1.

Tomb of Power - begin with 8 spins and a Wild is added to the Power Meter every spin. When a Lightning Bolt appears on the reels, one extra spin is awarded and Wilds collected thus far are placed on the grid. You don't lose the Wilds after this, so another Bolt adds even more Wilds.

Pyramidion slot is a decent effort by IGT whose online offerings have been poor for a few years now. There is the potential for 15 Wilds and a 1000x pay out but as usual the free games aren't that inspiring and nor is the RTP which can be 92.39 to 96.39% depending on the casino choice. Graphics, animations and sounds are pretty basic but modifiers are plentiful so it's not too tiresome to play between free games triggers. Pyramidion slot shows IGT are starting to understand the online market, but we are still a few pharaohs away from the Sun God shining brightly on their creations...