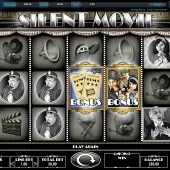 In the slot game Silent Movie, the developer IGT has tapped into a very original theme with the period of silent film. At the dawn of film production, when everything was shot in grainy black and white, an era of cinema with no synchronized recorded sound and no spoken dialogue was born. It introduced the very best in mime, comedy, daredevil stunts and muted gestures to the world. From the slapstick antics of Charlie Chaplin to the nerve-jangling tricks of Harold Lloyd, silent film left a lasting legacy and it is fitting that IGT should pay tribute to this golden age with a slot game in its memory.

Symbols from a silent film era

There are many symbols in the 5-reel, 30 payline Silent Movie slot game that conjure the feeling of old movie making, such as the director’s chair, mega phone, clipboard, movie reels and the cameras recording directly onto film strips which were so iconic of this cinema age. Along with these generic symbols are a number of symbols from 4 different films; Dr. Jekyll and Mr. Hyde, A Trip to the Moon, A Muddy Romance and Keystone Kops. These movie-related symbols also form part of the bonus features in Silent Movie, which I will come onto shortly. There is also the cinema screen Wilds and the bonus symbol cinema tickets. It’s worth noting that all symbols are in black and white with the exception of any symbols linked to a bonus features.

When you first set eyes on the Silent Movie slot you are overwhelmed with the number of bonus features that appear to be in this game. It is only after a while of playing it that you start to understand that the 4 free spins bonuses are just slight variations of each other. The bonuses are all linked to the 4 black and white films previously mentioned and are all triggered in the same way. You need to land the cinema ticket bonus scatter on reels 2 and 3 and then one of the movie bonus symbols (which will be a colored symbol. This will activate one of the following bonus features:

Dr. Jekyll and Mr. Hyde bonus – When you enter this bonus you will have to pick 1 of 3 boxes to reveal between 3 and 6 free spins. During the free spins all wins will be multiplied by 3 and only winning spins count. So you will get an extra spin every time a spin doesn’t produce a winning combination.

A Trip to the Moon bonus – Pick from 3 choices to reveal 10 – 15 free spins with extra Wild symbols included on the reels during the feature.

A Muddy Romance bonus – Once you have picked your total free spins, between 6 – 12 available, you will then play out the feature with extra scatter symbols on the reels. This feature has a greater opportunity of re-triggering the same feature or a different one.

Keystone Cops bonus – This feature rewards you a straight 10 free spins with between 2x - 5x multiplier on all winning combinations. Once you get through your first 5 spins your multiplier will change to between 4x – 10x.
Surprisingly, with so many different bonus options, they can be quite rewarding on occasion. I have managed to achieve several 100x wins and higher in a relatively short playing time (over a few days). They can also be quite stingy at times and you end up wondering ‘what was that all about’.

I have to give IGT 10/10 for originality for Silent Movie, having waded through a bunch of their most recent slots it really is a breath of fresh air. There are a lot of features in this game, which would suggest that this is a game more suited to casual players. However, my suggestion is that you give Silent Movie a chance before you go making your mind - you might be surprised. If you fancy something completely different then you may want to check out IGT’s Lucky Larry’s Lobstermania 2 which has plenty more color and a more cartoony theme.