Star Trek – Against All Odds slot 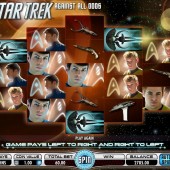 Those of you that have been fortunate enough to spend any time in Vegas recently will have possibly seen some of the new IGT slots that have hit casino floors. Some of them feature real movie footage, surround sound and vibrating bucket seats. One of these is Star Trek – Against All Odds, the follow up to the Star Trek slot released in 2011. Against All Odds has also been released online by IGT.

The online version of Star Trek - Against All Odds does contain a lot of the movie clips and sounds that the slot machine does, but it does lack the same experience in my opinion. Although, I think most players are aware it is hard to recreate that same ‘casino experience’. However, that doesn't mean that you don't still end up feeling slightly disappointing when you feel a bit deflated after trying the online version after the land-based version. Maybe they need to be more creative with their online slots to compensate for the experience the land-based casino can offer that the online casino cannot.

720 Ways to Win with Multiway Xtra

The game is one of IGT’s Multiway Xtra slots, giving you 720 ways to win apparently. I can believe it as well, as symbols pay left to right as well as right to left.  There is stacked wilds on the center reel, which can play their part in boosting your wins. There is a random feature called Energizing Wilds, which adds between 2-5 wilds to the reels. Sometimes this can be very effective, but not always.

Earn 40x Your Bet in the Enterprise Defender Bonus

The main bonus round is the Enterprise Defender Bonus, which is triggered by landing the bonus symbol on all 5 reels. Your first task of the bonus is to defend your ship from the missiles being fired at you, using your laser. This gives a gaming feel to the slot, with points awarded for shooting down the missiles. You will then be awarded the title of Lieutenant, Commander or Captain. The higher your ranking the more spins you will get on the following spin the wheel feature. The bonus is highly entertaining, with clips from the movie as well as several special effects, but it not as rewarding as I would have hoped. I generally found that I can’t win more than 30x to 40x my bet, but I haven’t played it enough to be sure that it doesn’t improve.

Star Trek - Against All Odds might take some time to grow on me, but I am sure in time it will. It is quite a different game to the first IGT Star Trek slot, which is built round a free spins bonus. This seems to be where slot games are heading, with more big names, big action and more gaming interaction for the player.