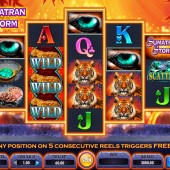 Online slot developer IGT is never shy to mix things up a bit with its slot game releases and the release of this Sumatran Storm slot is no exception to that habit.

Sumatran Storm is a 5 reel, 720 ways to win slot that has a tiger theme and is considered as a follow up to the popular Siberian Storm slot that the same developer released previously. Siberian Storm focused its theme on a Siberian tiger and this slot centers on the Sumatran tiger. This slot has already proved to be a success in land-based casinos so its release has been highly anticipated by online players. Will it be just as big a success online as it was in the casino floors? It's hard to tell but at first look the signs are encouraging and I would not be surprised if in a few years time we look back and see that Sumatran Storm has carried on the reputation for this line of slots that its predecessor Siberian Storm started.

For those who want to know where Sumatra is, it is an island in the western region of Indonesia. If you have been backpacking around Asia then there’s a chance you could well have visited this area and even seen one of these tigers.

If You Liked These...

Anyway, back on course, this is an exciting release for fans of Siberian Storm because it does continue with a lot of its predecessor’s features. The first thing you will notice is the hexagonal 5 reel layout. The graphics are not too dissimilar from other slots by IGT including the all-time classic Cats slot and the shiny and sparkly Kitty Glitter slot.

The Multiway Xtra betting feature means that there are 720 ways to win and that really is never a bad thing. This is a feature that is prevalent in a number of IGT slots including the Egyptian-themed Crown of Egypt and the popular slot Fire Opals.

The Sumatran Tiger is Wild!

The Sumatran tiger, from a side view, acts as the Wild in this slot. It appears on reels 2, 3 and 4 and can substitute for all other symbols to complete winning combinations except for the Scatter symbols and the tiger’s eye Bonus symbol.

Hit the Scatters to Win up to 50x Your Stake

Keep a Sumatran Tiger's Eye Out for 150 Free Spins!

The Sumatran tiger’s eye symbol triggers the free spins when you hit five of them across the reels. The free spins can be re-triggered and it is possible to trigger up to 150 free spins on this slot so a big chance to win prizes.

Sumatran Storm is a slot that land-based slots fans have been crying out to be released online and that release has finally come. Is it as good online as it is in the land-based casinos? Personally, I would say the online transition stays very true to its land-based sibling and this slot really does not fail to live up to the hype. Get on it now!