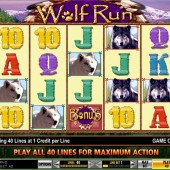 Wolf Run slot is one of the stand-out games from IGT and can be found in casinos all over the world. I first came across it many years ago in Vegas and it has not changed a bit since then. Its popularity has given rise to clones of the game such as Coyote Moon (also by IGT). Having proved itself as a massive hit in land-based, Wolf Run has since been released online where it has grown in popularity having found a new audience.

What makes Wolf Run such a hit is hard to see when you first set eyes on this slot. The graphics are fairly dated by modern day standards and the 5 free spins in the bonus seems a little stingy. However, it is the maths from IGT that really draws you in. Regular players of Wolf Run will know well the opportunity for a huge win to occur in any one spin, regardless of bonus. The stacked wilds in particular appearing on multiple reels and really trigger some huge wins in this slot.

To get through to the free spins bonus round you need 3 bonus symbols to appear together on reels 2, 3 and 4. This gives you just 5 free spins, which as I previously mentions sounds a bit mean, but if it retriggers you can be in for some nice wins. I am always looking out for the stacked wilds during the bonus round, which seem to come up more regularly.

Wolf Run has two enduring appeals to me and probably many other players. The sounds and sights of wolves on the reels is really cool and I can't help being drawn to it for that reason. The other big appeal is the way this game can turn a losing streak into a big win in just one spin, it really is a roller-coaster ride. There is 50 payline version of Wolf Run in both land-based casinos and online called Wild Wolf - read my review of it here. Other than the amount of lines, there are few differences in the two games. If that wasn't enough wolves for you, IGT also have another title called Wolf Rising, which has similarities to Wolf Run, but longer reels.