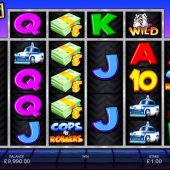 Cops 'n' Robbers Megaways slot by Inspired Gaming is based on the old Bell Fruit pub fruit machine AWP game and thus we get a decent selection of features. There is an overall slightly childish cartoon look to the game with silly sounds and music but it compares okay with other slots using the theme. Take for example Play'n Go's Cops 'n' Robbers slot which is a basic 9-liner, or Netent's Reel Steal slot which also at 9-lines is quite basic but volatile and you are miles away from this game. Perhaps Crime Scene slot by Netent is the most entertaining of these cop-themes but none of them have the range of features you get here. So can it be a great heist for our bankroll here or will it turn out to be a robbery victim itself?

You get 6 reels of 2-7 rows each with a top row of 4 symbols therefore Cops 'n' Robbers Megaways slot has 324-117649 ways. Wilds can appear on the top and scatters on all reels with symbols stacked and winning tiles replaced in tumbles. The pays are like Bonanza slot, top being Logo at 50x ber for 6-of-a-kind, Cop 7.5x, Swag Bag or Notes 2x with six card values of 1.75 down to 0.8x. Before we hit the main features, there are two modifiers.

You see a flashing light over reel 6 and when activated it stops on either blue or red.
Blue - Mystery symbols, up to 99 added to reels which may or may not create a win.
Red - Red Reels feature begins and for each paid spin until the feature ends, your robber character will try and advance 1 reel a spin left-to-right. He is either stopped by a red light after each spin or moves 1 reel more with a green light. Each spin the minimum ways increase too. The feature ends when either maximum 117649-ways are reached, you spin a win of 5x bet or more or get to the last reel whereupon the game spins 3 scatters in for a feature trigger.
Gamble Wheel - you open this option with 5x or better wins. You can gamble double-or-lose on the left wheel or for free spins on the right wheel, the green winning segment and amount of free spins ranging from 5 initially. The more you double the win, the bigger the green free spins segment on the right reel gets. You can then gamble free spins for more, losing them all if you fail. The maximum is 25.

Either from 3-scatters or more or getting to the end of the Red Reels, you get a choice of free games or Chase.
Free Games - with an increasing multiplier of 1x for each tumble, no retriggers but you may see the Wandering Wild, Bonzo the Dog appear above reel 5 on the top row. He moves 1-reel left each spin and if a Wild lands on the reel beneath him, it will make the whole reel Wild for that spin.
Chase Board - you are the Robber and get 3 dice throws to advance around the board collecting cash awards. After 3, the Cop throws dice too and chases you. Get round and land on the bottom left square, your round multiplier increases by 1x, maximum 5x. Get caught and go to an ID Parade. Pick yourself, game over and collect winnings. Pick Vic and return to the board to carry on with increased cash values. Pick Sid and carry on but with a compensation award added to your winnings.

Cops 'n' Robbers Megaways slot has a RTP of 95.19 to 95.50% if you follow the best strategy which Inspired Gaming says is to only take free games with triggers of 5 or more scatters, otherwise take the Chase feature. Despite the daft appearance there's plenty going on here with frequent modifiers and these can pay well at times. If you're fed up with the usual increasing multiplier free games, the Chase bonus is a very good alternative and can pay quite well too and entertains in many cases for several minutes. This slot is not as volatile as most Megaways games but can still kick out big wins with plenty of entertainment along the way. I say this is a good opportunity to embark upon your new career as a robber...