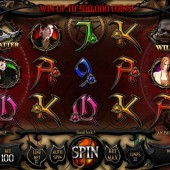 Hansel & Gretel is one of the most famous fairytales and recently received a Hollywood makeover turning the two hapless and doomed sugar-obsessed children into witch hunting adults in a twist on the story that actually sees them survive the Witch of the Gingerbread House. The movie starred Gemma Arterton, Jeremy Renner, and Famke Janssen and slots developer iSoftBet secured the license with Paramount Pictures to release a branded slot based on the 2013 cinematic production.

Hansel & Gretel – Witch Hunters is a 5 reel, 10 payline slot that has all the imagery of the movie so if you loved the film then you will feel right at home. The reels are set against Satanic scriptures and the general atmosphere on the reels is very eerie and dark.

The symbols on the reels consist of various characters from the movie including Gretel, the evil grand witch Muriel, the white witch Mina, two other evil witches, and the regular 9-through-to-Ace icons. Hansel is not seemingly on the reels so this must have been down to some image rights due to his involvement with other projects. Notable, The Avengers!

The Wild symbol is present on the reels in the shape of Edward the troll. He substitutes for all other symbols, except for the Scatters, to complete any possible winning combinations that appear across the reels. This Wild does possess a little extra power than your average Wild. If it appears on the central position of any reel then it will turn into an Expanding Wild to cover the entire reel if it completes a winning combination. During the free spins, the Wild will turn into an Expanding Wild if it appears on a central position on any reel, even if it does not complete a winning combination, and will remain in place as a Sticky Wild for the remainder of the free spins.

Let's be honest, Hansel & Gretel – Witch Hunters was a movie that probably had as much impact on the box office as Abraham Lincoln – Vampire Hunter. It has its following but generally did not look like threatening any awards ceremonies. However, it actually translates into a decent slot. There could be more bonus features and the absence of Jeremy Renner as Hansel is disappointing. It has a similar set up to iSoftBet's 24 slot but the increased influence of the Wilds as Sticky Wilds during the free spins is a top inclusion and the wins via the Scatters when you trigger the free spins is a double bonus. The visuals of this slot make it feel like the iconic Immortal Romance from Microgaming even if the gameplay doesn't quite match. I would recommend you at least give this slot a try.