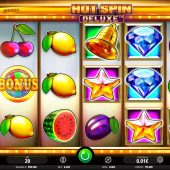 Hot Spin Deluxe slot by iSoftBet is a very entertaining and involving game with far more going on that you'd expect to see on a normal slot. Usually wheel-type bonuses are a source of frustration and disappointment as you will know if you've played those Wheel of Wealth kind of slots including the Wheel of Fortune ones such as Triple Action Frenzy or the latest one Hollywood Edition. The game itself has jazzy TV show style music and retro symbols with a gold background reminiscent of a game show, but can we hot spin our way to a deluxe bankroll here?

Symbols can appear stacked and singly on Hot Spin Deluxe slot except the scatter or Wild and we have 20 fixed pay Lines. The 5-of-a-kind pays are 25x for Wild or Diamond, 15x 7's or Star, 10 x Bell, 5x Melon with the Plum, Lemon or Cherry paying 2.5x for a full line. You can see a Wheel to the left of the grid with various prizes and this is the source of all the wealth of features we have available here.

This has an outer ring of segments containing features and modifiers for our reels and an inner one containing 4 to 15 spins, which can randomly turn into a multiplier ring with 2 to 10x displayed.

The Wheel can be triggered randomly during any spin and will award the modifier it stops on for just that spin therefore the inner ring of free games quantity is inactive but as with the main trigger you may still randomly see the multiplier ring appear. A bonus scatter on reels 1, 3 and 5 is the main trigger which will award the free spins where you get the selected modifier on every one.

There are many of them on the reel and they can get a random multiplier allocated whether triggered randomly for one spin or the 4 to 15 free spins.
Mega Reel - a 3x3 block symbol lands on the grid.
Ultra Reel - a 3x5 block symbol lands every spin for full-screen wins.
5, 7 or 10 Wilds - that amount are randomly placed on each spin.
6, 8 or 12 Mystery Symbols - that amount are placed randomly on the grid and remain in place for each spin, but change for each one.
Wild Reels - 1 to 3 reels will be Wild each spin, if Super Wild Reels is landed on, it will be 3 to 5 reels a spin.
In-Sync Reels - 1 to 3 reels will spin in Sync and if landing on Super In-Sync you get 3 to 5 reels each spin conjoined as with Twin Spin.

Hot Spin Deluxe slot has far more to it than I expected when first seeing it and really has some big potential if you alnd the Ultra Reels or 12x Wilds which cannot fail to pay less than 200x and 500x respectively although never expect more than 4 or 5 spins if you're lucky enough to trigger them, or a random multiplier! The RTP is 96.10% and the retro symbols really help to make the game complete and entertaining as the reels don't need to be complicated. The random wheel comes in during the base game often enough to make it entertaining and the inevitable conclusion here is that you have many different slots in one. I'd actually recommend this game as there's much to see - and win...