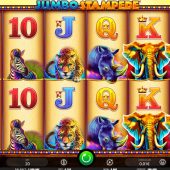 Jumbo Stampede slot is iSoftBet's answer to a number of slots which feature big wild animals and 4096 ways to win. It will therefore come as no surprise that if you've played WMS' Raging Rhino, Playtech's Buffalo Blitz or Pragmatic's Jurassic Giants you may know what you're going to see here. A background of the African plain, tribal drums as the musical soundtrack and numerous animals from the region make up the scene here and can produce some stampeding wins - apparently. So can our bankroll grow under this hot sun, or will it get trampled into the dust by these heavyweight beasts?

Given we have 4096 ways to win here we have 6 reels of 4 rows each with the symbols appearing either singly or in stacks so we can 2 on each reel, or 3 in the case of the top-paying Elephant. These will pay 7.5x your bet for 6-of-a-kind, with the Rhino or Leopard 6x, Zebra or Oryx 5x with six card values ranging from 4 down to 2.5x. These pays are the same as Rhino's and Buffalo Blitz's but there are some significant differences to explain. The primary one is that instead of paying 40 coins for a play we only pay 20 on Jumbo Stampede but as a result aside from the Elephant top icon, there are no 2-of-a-kind pays. You also don't get paid for scatters either, so no 1000x bet if you land all six!

We can begin with the Rhino similarities here; 3 scatters awards 8 free games, 4 award 15, 5 award 20 and of course if you're lucky enough to see all 6 you will get 50 free spins but as mentioned above, no 1000x win! During these spins you can retrigger in exactly the same numbers and again no surprise that just 2 scatters will award 5 extra spins. Guess what? During the free spins the Wilds appearing in any winning ways will have a random multiplier of either 2 or 3x applied, thus giving a maximum multiplier of 81x should all 4 appear in the grid.

Surely there must be another difference, you ask? Well, indeed there is because unlike in the other similar slots mentioned earlier, your top Elephant symbol will pay scattered during the free games. So for example seeing an Elephant on reels 1, 4 and 6 will pay one 3-of-a-kind Elephant win. Quite a novel idea in my view plus there is none of that horrid 'Bonus Guarantee' business whereby you get a minimum 10x bet pay in the feature!

Jumbo Stampede is quite imaginative and not quite the game I anticipated at the outset. The maths is quite different with the reduced bet and no scatter pays and I did notice that the extra spins or retrigger in the feature are less frequent than I was expecting, but the Elephants paying scattered is the reason of course. This tends to result in a more volatile bonus which has multi-thousand times stake potential as one would hope for in a game of this format. The RTP is pretty near the mark at just over 96% and the graphics and animations basic but adequate, simply because the slot is all about the mechanic rather than bells or whistles. I shall certainly consider another trip to Africa to try for one of those jumbo hits...