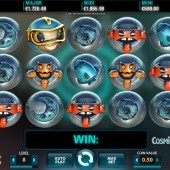 Scandinavian-based slots developer NetEnt drew a lot of attention in the Autumn of 2014 with its hotly anticipated release of the South Park – Reel Chaos slot. There was so much focus on that slot's release that nobody even considered life for NetEnt after that release. Well, luckily for the slots industry, life did go on and NetEnt did not sit on their bums twiddling their thumbs.

Cosmic Fortune is the 5 reel, 15 paylines slot that NetEnt decided to release post-South Park – Reel Chaos and with its slick graphics, awesome sound, and robotic aliens theme it basically has every cool attribute you could wish for in a slot. However, does the gameplay match its aesthetics or is this one of those Net Ent slots that looks the big deal but when it comes down to the nitty gritty fails to deliver?

The reels are laid out in a way that it reminds me of a previous Net Ent slot called Alien Robots and if I remember correctly that particular slot got a lukewarm appraisal by our team. The symbols on the reel consist of four different robot/ alien species including the blue robot, the Jabba the Hut-inspired pink alien, the red robot, and the orange robot. There is also a spaceship, a metallic moon, and a metallic full moon.

Before we mention about the Wilds, Scatters and bonus features, it's important to point out that this slot has Cascading Reels. I can hear the IGT-developed Da Vinci Diamonds slot fans fist pumping from here! For those unfamiliar with Cascading Reels, every time you hit a winning combination, the symbols in that winning combination disappear and the symbols above drop down into the vacant spaces left by the disappeared symbols producing a Cascading Reels effect. It's beautiful on the eye and even more beautiful on the account balance!

The Wild symbol is easy to spot. It is a metallic sphere with the letter 'W' engraved in gold on it. This symbol substitutes for all other symbols across the reels to help you complete winning combinations.

Find the Scatters to Trigger the FreeFalls Bonus

Land the Marbles to Win a Prize

Now, that is part one of this bonus feature over and done with. The second part consists of a spaceship taking all the marbles you have collected, flying above the reels and slowly dropping them down the reels where a number of buckets will now have appeared. The marbles will bump off the symbols on the reels and the aim is to bounce as many marbles into the buckets as possible to boost your prize fund.

Well, I am exhausted after explaining that slot let alone playing it. The potential for wins here on Cosmic Fortune is massive but the longer I played this slot the more I realised it was harder to trigger the bonus features, particularly the progressive jackpot feature. This has all the attributes to be a top slot game but the big question is whether NetEnt have tightened the triggering of the bonus features too much? Were they too scared of being taken to the cleaners or is there another reason for this? I don't know. Ultimately, this was a fun slot that I enjoyed playing even without winning much so that's a consolation. It does feel like the whole carrot on the string tale. The big prizes are there to be won but it's very unlikely you will actually win anything big on this. A fun slot but at the end of the day it was very frustrating. 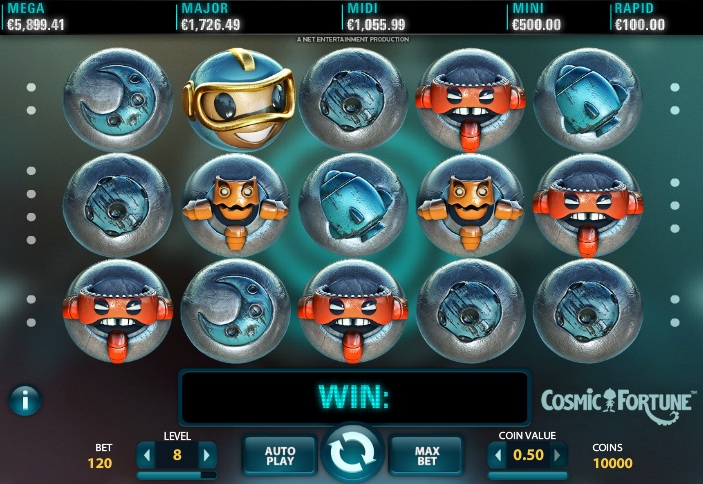