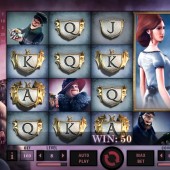 Branded slots are often big business in the slots market and NetEnt are certainly a developer that have joined this party with their slot Dracula. Unlike other branded games, which use images from movie clips or TV shows, NetEnt have created all their own artwork for this game, which is very impressive visually. The Dracula character himself is quite though prevoking with his furrowed brow and steely eyes, which adds to the enjoyment of this slot.

Dracula is a 5 reel, 40 payline slot based on Bram Stoker's horrific creature that has long terrorized the imaginations of humanity. The slot has come about after Universal Studios agreed a partnership deal with illustrious slots developer NetEnt. The partnership has already seen the successful release of the chilling Creature From the Black Lagoon slot and the eerie The Invisible Man slot. This title is inspired by the 2014 hit movie Dracula Untold that starred Luke Evans and Dominic Cooper.

There is not too much variety in terms of the symbols which may surprise you. There is Dracula himself, Mina (labelled as the young lady), a lady donning a fur coat, a man who bears similarities to Shkelgim, a young boy that looks like Ingeras (Dracula's son), and the regular Jack-through-to-Ace symbols.

The Wild is represented on the reels by a “W” symbol that appears to be written with blood. The Wilds substitute for all other symbols and help to complete winning combinations across the reels that may appear on a single spin. However, the Wilds only appear on reels 2, 3, and 4.

Don't go anywhere yet though! There is also the randomly triggered Bat Bonus feature. Once triggered, Dracula will turn into a colony of bats that will then land on certain symbols and turn all of those symbols into the same symbol including potentially a Wild. During the free spins bonus round, the Bat Bonus feature is triggered on every free spin so, as you might expect, there is a lot of action going on during the free spins.

Dracula is a slot that received a lot of hype and it is easy to see why. NetEnt launched the visually-impressive Glow slot just a short time before but that slot has been firmly overshadowed by this behemoth. The Bat Bonus feature is a master stroke but there are not many free spins bonus rounds that I have enjoyed playing more.