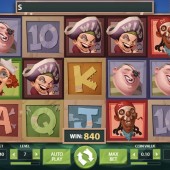 The Captain Cook-inspired slot game Hook's Heroes has been developed by NetEnt and has a distinctly cartoonie feel to it. The animated characters resemble something of a motley crew that spend a great deal of time at sea and you can tell straight away that it is a NetEnt slot by the way it has been designed.

Captain Hook... with a Twist!

Hook's Heroes is a cartoon-themed interpretation of the Peter Pan nemesis that gives him a more light-hearted spin. It is a 5 reel, 20 payline slot where instead of Peter Pan and the young boys we are dealing with a young Captain Hook and his band of so-called heroes.

The symbols that appear on the reels consist of a number of the eponymous heroes that are friends of Captain Hook. I cannot for the life of me tell you their names unfortunately but they are set against different coloured tiles including a red tile, orange tile, green tile, blue tile, and purple tile. There are also the regular 10-through-to-Ace symbols that fill the remaining positions.

Captain Hook is Young and Wild!

The Wild symbol is represented by Captain Hook himself looking quite menacing for a child. Signs of his evil ways creeping through even at this young age. He has the power to substitute for all other symbols, except the Scatters, to complete winning combinations.

What are the Scatters presented as I hear you ask? Well, one of Captain Hook's friends clearly has a twisted sense of humour with a level of foresight because the Scatter is represented by one of Hook's friends dressed as an crocodile. It is these Scatters that are the symbols you will need to trigger the free spins bonus round and the related features that can also be triggered. If you hit two Scatters on the reels then you will earn 1 free spin and trigger one of the three bonus features that will come into play for that single free spin.

Symbols Win in the Pirate Feature

The first bonus feature that can be triggered is the Pirate Feature. In this feature, wins are calculated by the number of symbols that can be seen on the reels and not by the winning paylines. This means that symbols do not necessarily need to appear next to each other to trigger pay outs.

Earn up to a 4x Multiplier in the Mermaid Feature

Land up to 5 Wilds in the Fairy Feature
The third and final bonus feature that is included in the game is the Fairy Feature. This feature will allow you to hit a potential number of 2-5 overlay Wilds across the reels. This will increase your chances of winning.

Trigger up to 15 Free Spins

Things do not end there. There is a full on free spins bonus round to hit as well. If you land three Scatters on the reels then you will earn the chance to pick one of the above three bonus features. Each feature has a different number of free spins attached to it. The Pirate Feature will reward 15 free spins, the Mermaid Feature will give you 10 free spins, and the Fairy Feature will earn you 7 free spins.

Double Your Spins with More Scatters

Again, that is not all. If you hit four or more Scatters on the reels then you will get 2-3 picks of the bonus features to go with your free spins. This means the more Scatters you trigger the free spins with, the more opportunities you will have to win big prizes.

Personally, I was always a big fan of NetEnt slots when I was first introduced to the online slots scene. The classics of the millionaire-maker Hall of Gods slot and the brilliant Jack Hammer slot were a couple of titles that pulled me in. However, recent titles have fallen flat and their apparent lack of enthusiasm in releasing games that are innovative and fresh has left me feeling a little disappointed. Hook's Heroes is a step in the right direction but still fails to capture the imagination. It's a mark up on the severely inadequate Sparks slot but it still has a long way to go before it reaches the same standard as some of NetEnt's finer titles. 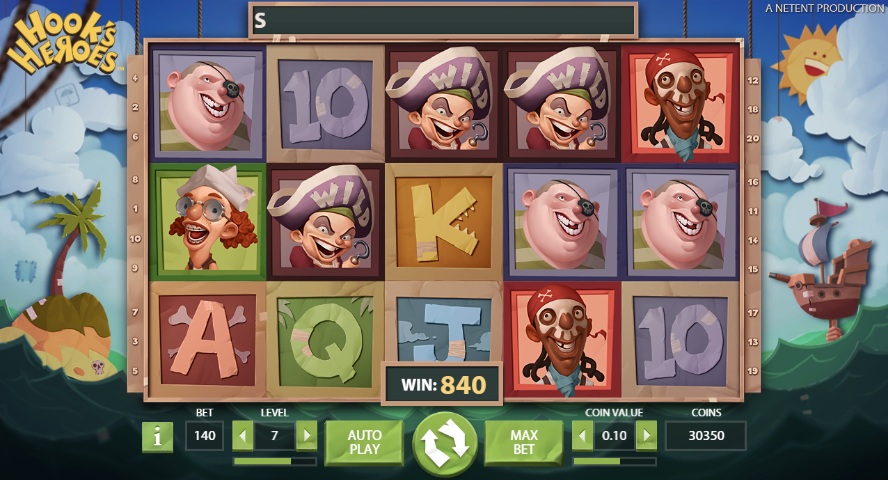