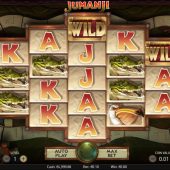 Jumanji slot is a game themed on the classic 1995 movie featuring Robin Williams. At first glance this slot appears to be a 720-way game with the 3-4-5-4-3 reels format, but it isn't! It's actually a 36-line game with stacked icons and like Jungle Spirit has a wildlife theme and native drums providing the mainstay of the soundtrack, along with dramatic roars and musical effects when various wins drop in. It's a decent looking slot and without juvenile icons for once too, which is a pleasant surprise after their Fairytale Legends series and Finn and The Swirly Spin for example. Some of these animal predators are showing some large teeth here, but will they be able to chew through your bankroll too?

You can play the 36 lines for only 10 coins which is a good start here and the pays aren't too bad in relation to that considering icons except the Wilds are stacked on all reels. There is a disparity though with the Lion paying 14x bet for a 5-of-a-kind, the Rhino 5x, Crocodile 3x and the Stork 2.5x. The card values all pay 1x or less so it's certainly a case of the Lion King here!

There are a few random features too which can occur during any spin.

Sticky Vines - after a win, the winning icons/Wilds will stick in place and the reels re-spin until no further winning icons are added to the screen, the same as the base game in Jack Hammer does for ever win.

Monsoon Wilds - one or two reels will fill with Wilds but if there's only one reel it will never be the fifth one, a nice touch!

Monkey Mayhem - any win in that spin is paid, then the cheeky monkeys will rearrange the grid to guarantee some more winning lines.

Wild Stampede - the grid shakes and in an impressive graphic display a herd of Rhinos rushes from left to right leaving 4 to 9 Wilds in their wake.

On all 5 reels you see animal idols of which you can land 3, 4 or all 5. You will proceed to a board and get 6 rolls of 2 dice, 7 for 4 or 8 for all 5 scatters. The corners of the board all contain a different free spins bonus which is activated when you land on it. Extra rolls and cash awards can be won as you go around too as well as a mystery which will award cash or even another free spins round of a different type, so it's possible to get 2 bonuses at once. You could also land on 2 or more free spins rounds before you run out of dice rolls.

Your 4 free games bonuses are essentially the based on the 4 random features described above, except that the random feature occurs on every spin.

Vines free spins - 10 spins with winning combo re-spins but this time all Wilds are sticky for the duration.

Monsoon free spins - one or two Wild reels each spin but cannot get the same ones on two consecutive spins.

Monkey free spins - a shuffle of symbols if you win or lose for 6 guaranteed wins.

Stampede free spins - 5 spins with the 4 to 9 Wilds left by the Rhinos every spin.

Jumanji slot is actually an entertaining game and quite good to watch and listen to. I've often criticized Netent for low potential hit maxima and low volatility tedious game mechanics and there are elements of that here too, but this time tempered by frequent random features and what can be a lengthy and absorbing bonus round. It is technically possible to go around the board and not get to land on any free spins just collecting cash along the way but it's very rare and I found more often than not you'd land on at least two of the free spins rounds available. This can add up to a decent award but the trick here is that with only 36 lines on such a big grid, it tends to be an accumulation of low wins of just a few lines each rather than multiple Lions for example, although that's possible. These animals won't give up their gold very easily, but they don't seem that concerned about taking too much of ours either...