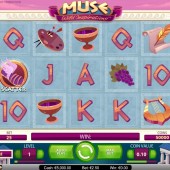 Fans of the British stadium-bothering rock band will be disappointed to know that this slot from leading developer NetEnt has nothing to do with anthems, guitar solos, and worldwide domination. It has everything to do with Greek mythology and the arts, however.

A 5-reel, 25-payline online slot, Muse draws its theme from the nymphs of lore who inspired artists and musicians.

Elsewhere, there are other typical Greek myth icons: grapes, winged sandals, the beautiful muses themselves - three of them in all - and Greek-looking gold-embossed 10-through-Ace poker symbols.

Look out for the gold medallion icon (representing the muse which inspired Tom Jones) as it acts as the game's Wild. Substituting for all symbols other than the Scatter, it works in three different ways depending on which muses are on the reels alongside it.

Expanding Wilds On the Reels

The brunette muse triggers an Expanding Wild, taking up the entire reel she appears on to give you more chances to win.

The purple-haired muse turns into a Sticky Wild, meanwhile, who stays in her place while the other reels spin around her. Finally, the redhead muse doubles any win when substituting for any other symbol.

The winged sandal belonging to Hermes - the Greek god of winged sandals - is the game's Scatter. Get three or more of those on the reels to trigger, in classic Net Ent style, a minimum of 10 free spins. Not only that, but getting muse Wilds during the free spins will double your wins.

If you are a sucker for the Classics, and want more, check out the classic ancient-themed slot, Book of Ra, from Novomatic. For more touches of the land of tsatsiki and bankrupt economies, try the Zeus slot from developers, WMS Gaming.