Mystery at the Mansion slot

Free Mystery at the Mansion slot

Mystery at the Mansion slot review 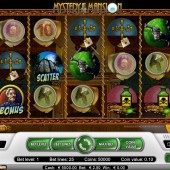 If the thought of Colonel Mustard in the library with the lead pipe gets you wet, you’ll love slot developer NetEnt’s Cluedo-inspired video slot, Mystery at the Mansion.

A 5-reel, 25-payline online video slot, Mystery at the Mansion comes equipped with a free spins bonus round, plenty of characters and icons from a classic murder mystery game, and some pretty tasty prize jackpot sums to boot.

On the five reels in the game we get the detective, the Colonel, mansion setting, letter opener, vial of poison, gun, candlestick and magnifying glass, plus the regular 10-through-King symbols.

The detective on the case of the Colonel’s murderer is the game’s Wild, and he substitutes for all symbols other than the Scatter and Bonus symbols. Five Wilds awards a tasty 7,500-coin jackpot.

The creepy Mansion symbol is the Scatter, meanwhile, and three or more across the reels triggers a range of free spins. For three Scatters you’ll get 10 freebies with a 3x multiplier, four Scatters gets you 20 spins with the same multiplier, and five Scatters on the reels gets you the top whack of 30 free spins.

However, look out for the Colonel, as he triggers the game’s Bonus feature when three or more hit the reels. Launching what is essentially a Pick Me Bonus game, you have to pick the Colonel’s murderer from a motley line-up of suspects.

Next, choose the weapon you think was used to commit the deed, then finally choose a motive. Is it the sexy French maid with the poison all for love? If you’re right you could boost your bankroll significantly.

Whilst NetEnt have nailed the atmosphere of Cluedo in this slot, you need to head to the welcoming bosom of leading 3D slots developers Betsoft Gaming for some really hardcore murder mystery action.

Their take on the whodunnit theme, Whospunit?, has some typically cracking graphics and animation, some neat bonus twists, and a massive potential jackpot.

And if you want to cut to the chase and enjoy a slot dedicated to the original board game, check out IGT’s trademark slot, Cluedo.