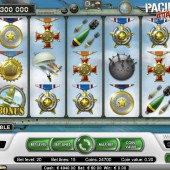 Alright! I know what you’re thinking! If this is basically the NetEnt slot version of the flop movie Pearl Harbor then I AM OUT!

Fortunately for you, it isn’t, and this slot bombs that awful film out of the water.

Pacific Attack! is a 5-reel, 15-payline online slot that has a theme based on the US and its fight in the Pacific during World War II. The symbols on the reels consist of a series of military medals, aircraft bombs, parachutists and water mines.

It's A War Thing On the Reels

NetEnt has gone all out to make sure the aeronautical theme comes through. Even the reels are made to look like the inside of a war plane with gauges, dials and meters that can be found in a war plane fuselage surrounding the reels.

Free Spins For the Pilot's Sweetheart

The pilot’s sweetheart Scatter is the key to the free spins in this slot and if you hit three or more of these across the reels then you will trigger the free spins.

Pacific Attack! also comes with a bonus round that is triggered when you hit three Bonus symbols across the reels. This bonus delivers a Battleships-style game where you must attempt to sink the enemy’s ships. The more ships you bomb, the larger your bonus prize will be.

This is no singin’ and dancin’ musical number like South Pacific, however; this is hardcore slots gaming right at your finger tips. There are not too many World War II slots out there and whilst some might argue that it is not a theme that should be celebrated by slots, it does provide a fantastic chance to remember those brave heroes who died in all conflicts.

Whether you feel a World War II slot is appropriate or not, there is no denying that Pacific Attack! provides some top slots action with a great chance to win a lot of free spins.

There are decent multipliers, and the extra bonus feature really delivers. In fact, it's similar to playing the Playtech-developed Captain America slot and the Lucky Larry’s Lobstermania slot from IGT, so give those slots a try if you like bonus rounds with a difference.