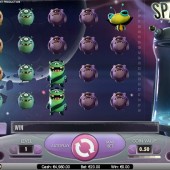 2013 was a big year for online slot developer NetEnt, seeing the release of some major new titles from the Swedish software company. One of those to emerge at this time was Space Wars, one of the quirkiest games from NetEnt to date.

Space Wars has a similar look to other slots from NetEnt such as the mind-blowing Elements The Awakening and the innovative and stylish Evolution, in that the characters almost float on the background. Rather than symbols on a reel like in many classic slots from slot manufacturers like pioneer slot developer Aristocrat or the world renowned software developer IGT.

The slot has 5 reels and 40 paylines and has a theme revolving around several different alien species involved in a torrid intergalactic war for control of a powerful crystal. Or something.

In terms of symbols we get various purple and green nasties which come stacked on the reels, while the backdrop is a nice shade of airbrushed mauve.

The first thing I noticed after a visit to the payout page is that there is no bonus round in Space Wars. Instead, players will be rewarded with a re-spin feature when a winning line forms on the screen.

This is where this slot comes alive as the space character (played by an alien) featured in the winning line is sucked into the glass room next to the game and then squashed by more of his kind.

They are then sucked up the air vent and spat out on the reels potentially forming more winning lines. On the odd occasion you will land many of the same character creating a huge win.

The game comes with some hilarious footage of the space characters doing stupid stuff. However, like with many things that come with funny clips and noises, after a while they lose their novelty.

For the type of slots player I am, the appeal of Space Wars was slowly eroded over time and after an hour of playing I had lost interest. That does not mean that others will not enjoy it and I am sure there are certain slots players that will come back time and time again to this game as it does offer something very different.