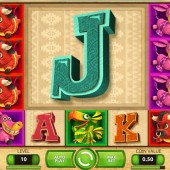 Scandinavian developer NetEnt has a proven track record for releasing slots that take a well-known theme and adding their own comedy twist to proceedings. An example of this was futuristic-themed Alien Robots that gave robotic characters their own personalities with great effect. Now, NetEnt is taking on the Mexican theme with this Spinata Grande slot.

Spinata Grande is a 5 reel, 40 payline that has symbols on the reels in the shape of different animal pinatas such as a red bull, pink donkey, green and yellow toucan, blue fish, and the regular 10-through-to-Ace symbols. The reels are also set against the back drop of what appears to be the setting of the 1986 cult comedy movie starring Steve Martin, Chevy Chase, and Martin Short called The Three Amigos!

Win Prizes with the Mini-Slot Feature

This slot also comes with a Mini-Slot feature that is triggered when you hit the Colossal Bonus symbol. This symbol will reveal a mini slot within its area. In this Mini-Slot feature there is the chance to earn free spins, extra spins, and instant cash prizes with the bronze, silver, and gold coins.

At first play, I saw what was on offer with this slot and I was intrigued. The inclusion of the Colossal Symbols had me expecting regular pay outs with thick and fast action. Unfortunately, the pay outs were slim pickings and the fact that you need to hit the Bonus Colossal symbol to even stand a chance of triggering the free spins bonus round saw my enthusiasm dry up very quickly. If you can get to the free spins bonus round then there is no doubt that you can get a big win but it's close to mission being impossible. The best way I can describe playing this slot is by comparing it to a pinata that is full of prizes that you spend hours hitting as hard as you can with absolutely nothing coming out of it. You're better off playing the Leander Games slot Mad Pinatas for your Mexican party fix.