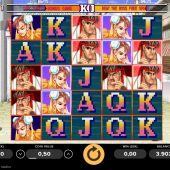 Street Fighter 2 slot by Netent uses the old Capcom arcade game released in 1990-91 as it's very retro theme! It's heavily pixelated like Thunderkick's retro Flame Busters slot with of all things what looks like a Chinese wet market behind the grid and a street scene around the edges. You have plenty of oriental music, synth and various shouts as the fighters trade blows. This game is quite involving, so can our bankroll fight its way out of these mean streets?

You have cluster pays of 4+ symbols adjacently to win here on Street Fighter 2 slot and pay 20 coins to play. The tiles cascade in on the 5x5 grid and there are 20 different symbols with four card values and 8 characters called Ryu, Ken, E.Honda, Chun Li, Blanka, Zangief, Guile and Dhalism which appear in both victory and defeat form so 20 in all! The pays range from 30x bet for 16+ of the Victory characters and 0.5x for 4-clusters, 20x for 16+ down to 0.5x for 4 of the Defeat characters with the card values 10x down to 0.5x. There aren't any random modifiers but in-play cumulatively-triggered events will occur plus the characters can appear in colossal 2x2 sizes.

You choose from one of the 8 characters and each play will get one of the other 7 allocated as your opponent. The volatility of each is graduated from maximum if you choose Ken, down to the lowest 'win often' fighter. If your health meter reduces to zero you trigger a Car Smash Bonus, if the opponent's does then you get Beat The Boss free games. The meters start at 75 points and are reduced for each winning tile of either your Victory or the equivalent character's Defeat tiles. Only your characters and that of the random opponent will appear on the grid in the battle, which is really another word for the base game.

There is a Wild meter filled with 7 segments and each character tile used in the base games wins on any single play will fill a space. Once wins have been paid, your character will activate his Wild feature once for each 7 collected, then the final total is paid out. The characters simply have their own pattern of placing extra Wilds on the grid.

This is a smash the car graphic which will earn you 5 to 15x your stake. You can do it manually by controlling the character with your keypad or simply select auto to bypass it and collect the poor sum awarded.

There are 4 levels here. You start on a 2x multiplier, meters now only need 25 points to fill, you fight Balrog and spin until one of you loses their health via winning tiles. If you win, then the 3x multiplier begins and you fight Vega. Beat him, then level 3 with a 5x multiplier is where you fight Sagat. Win again, you go to a 10x multiplier and the final boss, M. Bison. If you are lucky enough to beat him then you also get an additional 100x bet awarded, but it's rare!

Street Fighter 2 slot is very good in the way it has executed the retro game theme here and incorporated into a quite busy slot game. The RTP of 96.01% is average but it does vary sightly across the characters you choose to play with. There's always something going on in the base game which has excellent animations and sound effects and you know you'll eventually trigger the main feature by progression. The free games can pay very well if you get to the last level although this Beat The Boss feature seems to have been borrowed from their Wild Worlds slot though to be fair it's modifiers are very different. Whether you were around in the 1990's or not, you may want to fight your way into these streets anyway...