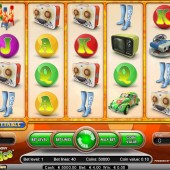 While the whole world seems to be going 1980s-crazy right now, whether it’s the fashion, music or crap digital watches being seen on every suburban High Street corner, it’s good to see slots developers keeping the ‘60s fans happy.

Leading slots developers NetEnt have actually launched a trilogy of retro video slots, The Groovy Sixties, The Funky Seventies and The Super Eighties.

The latter two are definitely worth checking out, Funky Seventies with its cute retro vibe, classic Starsky & Hutch cars and Disco lights, and The Super Eighties with its pink Stilettos, Sony Walkmans and pink neon.

The first in the trilogy, The Groovy Sixties, definitely trumps the lot, however, with its psychedelic color scheme, flowered up VW Beetles and sexy boots.

In keeping with some of NetEnt’s other slots, The Groovy Sixties is a 5-reel, 40-payline game with limited features but bags of character. There’s a Skill Stop button on the main screen so you can stop the reels any time you like mid-spin, and a wide range of betting, but bonus hounds will be left wanting.

The reels themselves would put an Austin Powers shag-pile to shame. There’s groovy orange everywhere, funky lava lamps, old-school TVs, cine cameras, knee-high boots and VWs daubed in flowers. Even the common 10-through-Ace poker symbols have been given a Sixties overhaul.

As with Net Ent’s other retro slots, and a lot of the developer’s other games, the Wilds are stacked, meaning there are many more possibilities to win big. The ‘60s Wild’ symbol is the game’s Wild – obviously – and it substitutes for all symbols other than the Scatter.

A 1,000x-line bet win can be yours by hitting five Wilds across the reels. Three of the groovy hipster Scatters will win you five free spins with a 2x multiplier. Not only that, but they can be re-triggered during your bonus round too.

The Groovy Sixties acts as a nice little counterpoint to Net Ent’s other retro games, but with a rather limited bonus offering you may find yourself looking elsewhere for bonus treats.

If the Sixties are your bag, however, you’ll probably be drawn in by the funky colors and bright ‘n’ breezy overall tone. If you like your slots all happy and cheerful then you will also be sure to enjoy NetEnt slots in the form of the ridiculously cheery Flowers slot and the '70s revival slot Disco Spins.