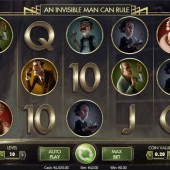 The Invisible Man was initially a best-selling novel by author H.G. Wells (of War of the Worlds fame) back in 1897 but the whole premise of the Invisible Man soon took on a life of its own and it soon inspired several television series plus a hit movie in 1933 directed by James Whale.

The creative slots developer NetEnt have now taken the story and launched it onto the slots platform in the shape of this 5 reel, 20 paylines slot that has a film noir feel to its reels showing that the slot is more based on the movie than the novel.

On the reels you will find a number of unique symbols including Dr Kemp, Janny Hall, Herbert Hall, Flora Cranley, and the Chief Detective as well as the regular 10-through-to-Ace symbols you would expect to see on the reels.

Walking Wilds
The Wilds are represented by Dr Jack Griffin aka The Invisible Man and Constable Jaffers. The Wilds play a more pivotal role on this slot than you might think. In fact, this entire slot is revolved around the Wilds. In a slots first, The Invisible Man comes with Walking Wilds. Not only do the Wilds substitute for all other symbols to complete winning combinations but the Wilds will then move on to the next reel on the next spin until they disappear off the reels creating this Walking Wilds effect. In addition to this, every time a Wild appears on the reels, the Wild will remain in place for an extra Re-Spin. This can deliver you some decent payouts if you manage to hit more than one Wild symbol across the reels.

There is also a free spins bonus round. This is triggered when two Wilds collide on the reels when they are “walking” to the next reel. This will see the two Wilds combine and form a new Wild. You will be rewarded with 10 free spins for every pair of colliding Wilds if this happens. These free spins are also the key to triggering the bonus features in this slot. As the free spins progress you must collect certain symbols to determine which bonus feature you trigger. There are two bars at the top of the reels to determine how close to triggering the two bonus features you are. Whichever bar fills up first, that will become the bonus feature you trigger.

Pick and Win Your Cash Prizes

The first bonus feature is the Pick and Win Bonus. You will be taken to a second screen when this is triggered to show three different stages – the local pub, a mansion, and the railway station. On each stage you must click on random objects to reveal cash wins and multipliers. However, one of the items will randomly be designated as a police siren and if you click on that item then that stage will end. So you must avoid the police siren!

Win Big with Burning Wilds in the Police Spins

NetEnt have a solid track record for releasing slots based on classic movies. The atmospheric hit Aliens slot and the sinister Creature From the Black Lagoon slot are just two examples in recent memory. The Invisible Man does sit well in the company of those two slots. The presence and influence of the Wilds was a real draw for me and the inclusion of not only a free spins bonus round but two bonus features on top of that was fantastic. However, I found the slot to be very tight and it rarely let me hit Wilds in the base game. The fact you can only trigger the two bonus features via the free spins bonus round means this slot has a feel of “all or nothing” about it. At its best, this slot could really please players but at its worst it could go down as one of the most frustrating slots of the year. 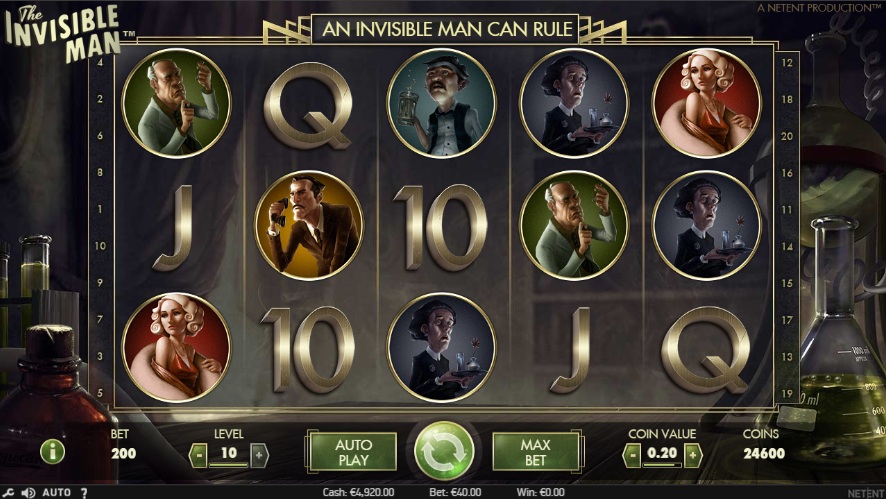