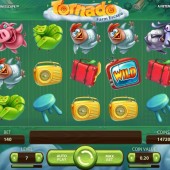 When Scandinavian-based slots developer NetEnt launch a new title onto the market players often take notice. This is more so when it is the first release of a new year as is the case with this Tornado Farm Escape slot. To cope with the attention focused on them for this new slot, NetEnt have opted for a comedy feel that is a slight change in creative direction from the slots it has recently added to its portfolio such as the film noir-inspired The Invisible Man and the eerie space-themed Aliens. In fact, it is more a gamble because last time NetEnt touched upon comedy it was with the indifferently received South Park – Reel Chaos slot at the back end of 2014.

The story behind Tornado Farm Escape is established in the opening movie sequence. It depicts a working farm where the animals are pushed to their limits to help provide for the farmer before a tornado hits the farm and the animals use the tornado to escape on a vacation.

Tornado Farm Escape is a 5 reel, 20 payline slot that has its reels packed with comical-looking animated farm animals including pigs, sheep, horses, cows, and chickens. The other symbols consist of a wireless radio, stool, wellies, a suitcase and an arm chair.

Look Out for the Wilds!

The Wild is represented by the Wild television symbol. This substitutes for all other symbols, except for the Hot and Cold Scatters, to complete any potential winning combinations so it helps you to win some big cash prizes and is always a welcome sight on the reels.

Blow Hot and Cold to Trigger the Tornado Bonus

The main bonus feature on this slot is the Tornado Bonus. This is triggered if you manage to hit a Hot Scatter symbol anywhere on reel 1 and a Cold Scatter symbol anywhere on reel 5 simultaneously. Initially, the symbol that appears on the second row on the middle reel will become active. A tornado will then sweep across the reels and pick up all the active and Wild symbols. These symbols are then combined to award you a cash prize. The tornado spins will continue until no Wilds appear on the reels.

Get Ready for the Random Storm Bonus

Another feature included on this slot is the randomly triggered Storm Bonus. When this begins, a storm cloud will randomly appear on the reels and move across the reels one position at a time turning regular symbols into Wilds before it moves off screen. There is a big chance to hit some impressive Wild combinations in this feature.

Tornado Farm Escape is an entertaining slot and a fun theme. The bonus features are not your usual free spins and Pick 'em Bonuses. The Tornado Bonus can last a fair few spins and can see you earn up to 167,000 coins. The Storm Bonus also keeps you on edge on every spin because you never know when it will trigger and bring with it some big Wild wins. This is certainly a return to form for NetEnt after recent releases such as the sci-fi-inspired Cosmic Fortune and the slightly disappointing Invisible Man slot.