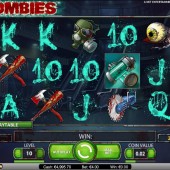 Zombies are a buzz topic right now, with the hit US television series The Walking Dead and a range of computer games like Left 4 Dead still so popular with viewers and gamers alike.

Online casino slot developer NetEnt has released Zombies in an effort to capitalise on the popularity this genre is experiencing.

Zombies is a 5-reel, 20-payline online slot from NetEnt that does stand out from the crowd.

This is not only because the sound and graphics are bordering on perfection but also because it is one of the most enjoyable slots to play right now. It is yet another stunning release from NetEnt that follows in the footsteps of other popular slot releases including the Gothic themed Frankenstein and the outstanding cosmic slot Elements: The Awakening.

Stacked Wilds Wake This From the Dead

The main aspect of this slot is the Wild feature. There is the regular Wild symbol that is present during regular game play. It appears on Reels 1, 2, 4 and 5 and can substitute for all other symbols except the scatter symbols to complete winning combinations.

There is also a Stacked Wild symbol that comes in the form of a bloodied zombie and appears on the third reel. It is the size of three regular symbols and if a part of it appears on the reels then it is nudged up or down to complete a winning combination on a bet line.

Look Out For Random Wild Zombies

Zombies also includes the exciting Random Wild symbol. This is presented in the shape of a pair of zombie heads. It is included in the game to give you more chance of winning big prizes. It will appear on the reels after a spin that does not trigger the free spins feature or the Stacked Wild feature. Up to six of the symbols that triggered the Random Wild feature can be turned Wild during this feature.

The scatter symbol is represented by the Virus Container and if you hit three or more of these across the reels then you will trigger the free spins bonus feature.

You will be awarded with 5 free spins initially and before each free spin you must go around shooting zombies to win extra credits.

Zombies might be deemed to gory or graphic for you if you have a weak stomach but for fans of the zombie genre this game will be right in your ball park. There are enough ways to win with the bonus features and Wild symbols. The authenticity of the graphics and sounds will also leave you wanting more.

It is also great to play a game that has such a fun and interactive bonus feature. Let’s face it, who doesn’t love blowing zombies to pieces and winning credits for doing so? 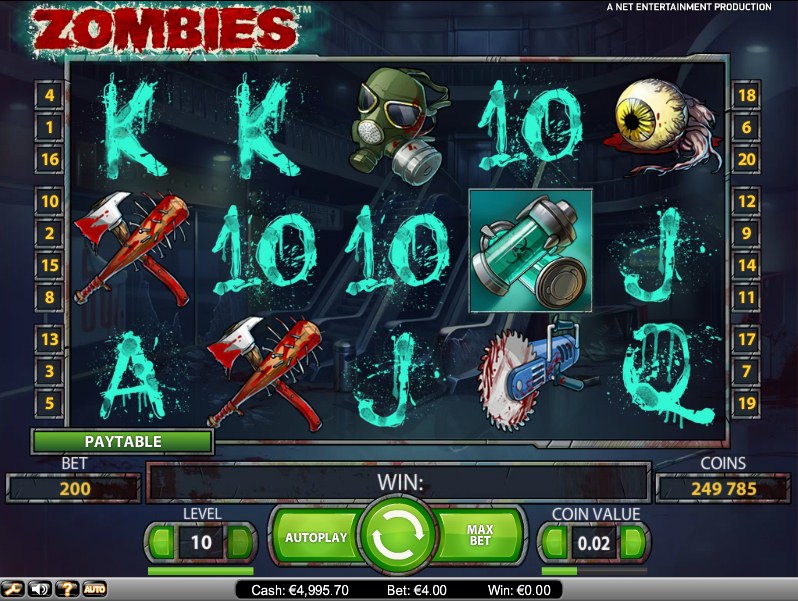