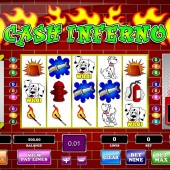 Trust Novomatic to come up a classic-style video slot that looks and feels as if you're in a Vegas casino.

There's also a touch of the British fruities about the developer's 5 reel, 9 pay-line Cash Inferno game, with its simple sound FX and graphics, and game title above the reels that lights up as you spin the reels.

Cash Inferno is - as the 'Inferno' part of the title suggests - all about the emergency services in the US and their day jobs, and as such the icons all reflect various parts of the job.

A fire hydrant, a fire hose, a burning match, a flashing red light and a fire extinguisher: all are present and correct. There is also a trusty fireman's sidekick - a jolly black and white Dalmatian doggy (called Sparky) - who makes up the reels, with a walking Dalmatian and sitting Dalmatian taking their place on the reels.

Sparky also forms the game's Wild and subs for all regular symbols other than the other Dalmatian Scatters. Five Wilds pays out a lovely 12,500-line bet jackpot if you hit five across the reels.

Don a Hat to Trigger the Bonus

Look out for the many bonus icons on the reels. You'll see the Fireman Hat, Police Hat and Rescue Hat up on the reels, and three or more of the same Scatter on adjacent reels will trigger the game's bonus feature. The more hats you land in order to trigger the bonus, the higher your bonus multiplier will be.

Earn up to a 30x Multiplier!

When the round starts you will see a building ablaze; click on the various windows to open them and win multipliers. Keep picking windows until you hit the Finish window. It can be a pretty tasty bonus feature to trigger as you have the two bonus multipliers. Potentially, then, you could get a 3x multiplier times by a 20-30x multiplier in the game itself, all multiplied by your total credits.

Cash Inferno is a nice little game. It doesn't look like much at first glance, but it's smooth, the graphics are simple, and the bonus wins can be big (I regularly hit about 20x when I played). It's a shame that with just the 9 paylines it takes ages to trigger the bonus feature in the first place.

Still, for fans of old Vegas-style slots, they should get a kick out of this. Check out Gamesys's diamond-themed A Girl's Best Friend, while old-school legends Barcrest have their own gem-themed slot, Crown Jewels, which offers similar Vegas charm.