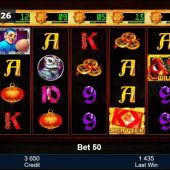 Dancing Dragon slot is a rare excursion into the Orient from Novomatic, not usually noted for their relentless use of the Chinese them unlike Red Tiger and Microgaming although they have developed a few including Asian Attraction and Dragon's Pearl. Here we get a pretty basic-looking game with no background as such, just dark reels and we don't even get their traditional 'wheedle and trot' as we play - well we get the trot as the reels stop but a Chinese tune as the reels spin instead. Novomatic tend to produce volatile games so will this dragon be dancing on the ashes of our bankroll?

As there are 50 paying lines on Dancing Dragon we need 4 rows over the 5 reels which have stacked card values at 2 rows high but the main icons are single as is the Wild. The Wild appears on all reels and is naturally the top pay at 20x bet for a 5-of-a-kind win, followed by the Male or Female characters both awarding 16x, Dragon 10x, Gold Tokens or Lantern 8x and six card values paying either 4 or 3x our 50-coin bet for a full line. There are scatters too on all reels in the form of books and lastly a Gold Star can appear randomly during any spin and it will add +1 to the counter above the reel it lands on, for purposes that will become apparent!

Once you have landed 3 or more scatters, you will begin an animation whereby the single Dragon Wild on each reel will grow into a super-stacked Wild according to the number displayed above that reel when the bonus begins. You begin with 8 above each reel when playing for the first time, so in this case you would see each Wild become 8-rows high in a dramatic animation. When the bonus finishes, the reels 're-seed' to show anything from 4 to 15 above each. The most you can accumulate is 75 Wilds, 15 on each reel and the round can be retriggered indefinitely. You have the chance of a full screen of Wilds in these spins, the top possible 1000x bet spin.

Dancing Dragon slot isn't too volatile despite the big-win potential in the bonus, so the base game should keep you going longer than on many Novomatic games when you aren't hitting the feature. The graphics, effects and sounds are pretty mediocre as is the 95.10% RTP we get here but in all honesty it's not a bad slot to play. The feature comes in more frequently than on many Novomatic slots and is usually quite good as one sizeable win at least tends to appear using the stacked Wilds. I'm not sure that the dragon had me dancing, but he certainly never scared me off...