From Dusk Til Dawn slot

Free From Dusk Til Dawn slot

Play From Dusk Til Dawn now

From Dusk Til Dawn slot review 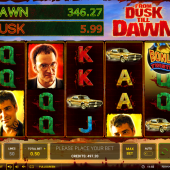 From Dusk Till Dawn slot is a rare Novomatic trademarked game based on the 1996 black comedy horror film written by Quentin Tarantino which spawned a TV series too, beginning in 2014. Novomatic did make the rather pathetic game 'Hoffmeister' centred around David Hasselhoff but fortunately From Dusk Till Dawn is a class or two above that with realistic images and characters and seemingly plenty going on. The reels sit over a dusty truck stop from the set and we get some music straight from the movie as we spin, but don't worry as Novomatic have still managed to retain their clunky reel stop sounds in case you forget who made the game! Will this be a slot you stay on until the sun come up though?

On the reels...
The icons of the 50-line From Dusk Till Dawn slot of 5 reels and 4 rows appear either singly or double-stacked with the exception of the Wilds which can be either single or full-reel height. Of the character symbols only our handsome hero played by George Clooney appears triple-stacked which is just as well being as George is the top-paying icon at 5x bet for a 5-of-a-kind line. The other three characters all pay 2x and the lower symbols from the car down to the five card values pay between 60 and 40 coins for your 50-coin bet. Low line pays are the consequence of having so many pay lines so how can we achieve any big wins?

The wait for the main feature trigger is broken up with some random in-play entertainment Novomatic have added to the scene, in fact we get three to discover:

On The Run - a car may dash across the reels after any spin leaving a trail of Wilds in its wake.

Everybody Be Cool - George Clooney's favourite line is spoken as during any spin the three double-stacked characters may all turn into the triple-stacked George Clooney on the reels.

Cash Explosion - every time you get a win equal to or over 1x your stake then it may explode awarding a multiplier from 5 to 25x. Mind you, with the low line pays this could be difficult!

Three scatters appearing on reels 1, 3 and 5 will award you three spins of the bonus wheel. You may get three cash awards which will end the bonus but each time you get one the prizes are increased on the wheel for the next spin. The bonus will also end as soon as you land (hopefully given the poor cash awards) on 'Pick-a-Bonus' whereby you can choose one of two free spins rounds.

Dancing Bonus - a double Wild in the form of an exotic dancer floats around reels 2, 3 and 4 each spin and can change in shape to cover the two up to all twelve centre positions. This could be helped by the fact randomly a flame can appear on reels 1 and 5 turning them into full reels of identical symbols.

Mugshot Bonus - your grid turns into 15 individual tiles with only Seth and Ritchie on. You get 3 spins and every time a Ritchie or Seth appears it reveals a cash award, sticks and resets the spins to 3. If an upgrade occurs then all the Ritchie symbols turn into Seth which pays more. Up to four upgrades are possible which increase the prizes for each tile displayed and if you fill the grid up you get a 100x stake award on top.

There are also two random 'Dawn' and 'Dusk' jackpots available which are random network ones beginning at 5.00 and 200.00 and won frequently so will never get too high.

From Dusk Till Dawn tries to be an action-packed slot but the pays are simply too low and this might make you expect a low volatility game, yet it manages to have the poor base game turnover of a far higher-volatility slot. The RTP is hardly great at 95% either and the random features are quite rare considering the usually poor returns. The graphics and soundtrack are impressive, but the worst aspect by far is the dreadful and player-unfriendly bonus format that for some reason developers who should know better insist on fobbing the player off with - yes, like Microgaming's Tarzan and Netent's Guns'n Roses, hitting the bonus doesn't mean you'll get the feature or free games but has the likelihood of some tawdry cash award. That is not cool on any slot after waiting for those elusive scatters to drop. From Dusk Till Dawn may have been a spoof horror move, but for me the horror was for real...