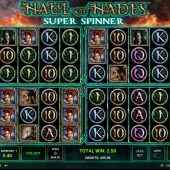 Haul of Hades Super Spinner slot by Novomatic brings with it a strange coincidence in that it's been released in the same week as Netent released a sequel in Butterfly Staxx 2, Microgaming with Break Da Bank Again Respins and this is a sequel to Haul of Hades slot. It looks simple enough with a background of an underground chamber dimly lit by flaming torches as would befit the Greek equivalent of hell and we get equally creepy music as we play. Microgaming created Hot as Hades but this looks far more frightening, so will it be enough to scare our bankroll away too?

On The Reels...
We can see straight away the symbols are stacked singly and 2-high on Haul of Hades Super Spinner slot and we get 10 lines with adjacent pays, meaning 3 consecutive symbols can appear anywhere on a pay line over the 5 reels. Despite this, the 5-of-a-kind pays are good with the Dark Princess 250x bet, Old Man 50x, Princess and Lady Warrior both 40x and five card values at either 20 or 15x for a full line. The top symbols will expand to fill the whole reel if they appear in a win and there are no scatters or Wilds at this stage.

Super Spinner
The mechanic here is that wins of 4x bet or more will open up a set of 4 grids which thus cost 40 coins to play instead of 10. Now you see a stacked Wild can appear on the centre reel of any grid and if it does it will replicate to all subsequent sets, i.e. if appearing on the second grid, then it will appear too on the third and fourth. You can play up to 50 spins on the Super Spinner set or until you run out of funds, but you can collect at any time, or even on the triggering 4x or more win and not opt to play the Super Spinner set. So no scatters necessary here!

Our View...
Haul of Hades Super Spinner slot had me guessing it would be yet another low-paying and low volatility Novomatic, but I was pleasantly surprised. The artwork, sounds and animations are very good and apt for the theme although we get an RTP as usual lower than the average slot, in this case 95.05%. You can often get a good run if you do spend all your qualifying wins on the Super Spinner feature and there is some very big potential with multiple lines of the best 5-of-a-kind. Your trip to Hades may not be as terrifying as you anticipate...