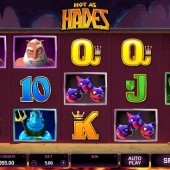 Hot As Hades might sound like a track from a KISS studio album but it is in fact a slots release from veteran slots developer Microgaming. It goes without saying that Greek mythology-themed slots are something of a common occurrence across the slots market so this title should come as no surprise.

Hades the Bad Guy... or Misunderstood?

This slot is a 5 reel, 20 payline game based on the ancient Greek God of the underworld. He might get a bad press and be labelled as the “God of the Dead” but Microgaming have set about giving this villainous character a PR makeover. Well, to the extent where he is more seen as a cheekily and dastardly individual rather than the heinous evil being.

The symbols on the reels include Hades himself who looks a bit maniacal with a huge grin and flaming hair, Zeus, Poseidon, Medusa, the three-headed dog Cerberus, and the regular 10-through-to-Ace symbols. Yes, all your favourite characters from Clash of the Titans are here. Except Cyclops. He's suspicious by his absence.

The Wild symbol is represented by the Hot As Hades logo. This substitutes for all other symbols across the reels, except the Scatters, to complete winning combinations. It also pays out a 2x multiplier on any of these wins so that's an added little bonus.

Scatters are represented in the form of the horned crystal mask. If you hit three or more of these symbols across the reels you will trigger the Quest Bonus. The said quest is for the crystal helm. You must attempt to navigate your way out of the underworld and get the better of Hades' minions as you try to win big rewards. There are four levels you must complete before reaching Zeus' chamber where you will earn the chance to win the crystal helm and the pay outs it brings with it.

Hot As Hades initially appeared to be another run-of-the-mill Microgaming slot in between its big budget licensed releases. However, the randomly triggered Super Mode keeps you on your toes, even though it could be triggered more frequently, and the Quest Mode gives a similar feeling to Play'n Go's epic Tower Quest slot. This is a step in the right direction for Microgaming who were faltering and losing support from slots players but they still have a long way to go. They get the big releases right, there's no denying that but to keep fans hooked throughout the year they need more slots like this... just a bit more lucrative. If you are looking for more Microgaming-developed Greek mythology-themed slots then you might want to give the action-packed Mount Olympus - Revenge of Medusa slot a spin.